UCLA biologist works to create a new field, merging the sciences and architecture

Research has implications for health and disease, teamwork and collective behavior 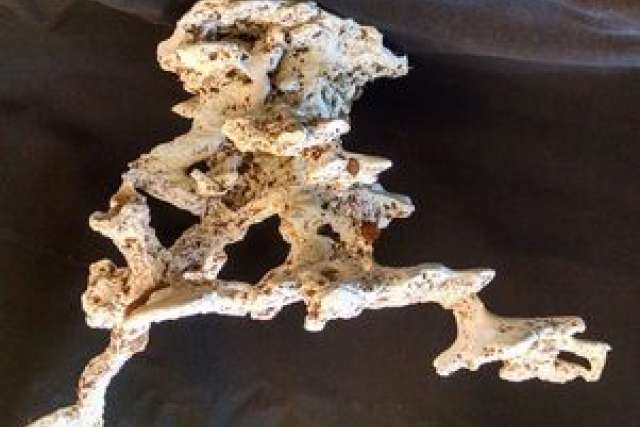 <em><br>Noa Pinter-Wollman</em><br>A plaster cast of a nest built by a colony of the harvester ant Veromessor Andrei.

How do spaces affect us, and animals? UCLA biologist Noa Pinter-Wollman had the idea that we can learn from the way animals use space, and, with several colleagues from the U.S., England and France, she is launching an effort to create a new field of study. Her goals are ambitious.

Does she hope her research will lead to better homes, better offices and better communities?

It all started when Pinter-Wollman was studying harvester ants in Southern California called Veromessor andrei; the ants live in nests and the same colony, which contain thousands of ants, can move between different nest sites, more than 50 feet away.

Shortly after conducting this study, Pinter-Wollman attended a conference in 2014 — sponsored by the National Academies Keck Futures Initiative, a program of the National Academies of Sciences, Engineering and Medicine — that brought together scientists who study collective behavior in cells, animals and humans. She met scholars in an academic field of which she was unaware, called environmental psychology. She also met a social scientist from the University of Central Florida who was studying team work of humans in different structures.

"It sounded a lot like my ant research," she recalled thinking.

Among the similarities, both humans and ants use spaces to quarantine the sick; humans don't want lead in paint, while bees and birds also use materials that promote healthy lives; for example, birds put bay leaves in their nests, containing compounds that decrease parasites from entering the nest. Bees and ants use resin in their nests to reduce parasites.

"Just like we clean out spaces and use materials that promote health and enrich our environments, animals do this, too," Pinter-Wollman said.

That conference led to a workshop last October that brought together life scientists, social scientists and architects.

And that led to a new publication this month: a special issue of the journal Philosophical Transactions of the Royal Society B (the B is for biological sciences). The Royal Society dates back to the 17th century. Isaac Newton and Charles Darwin are among the published authors in its journals. The July 2018 issue is titled "Interdisciplinary Approaches for Uncovering the Impacts of Architecture on Collective Behavior." Its focus is on quantifying and analyzing the impact of the physical environment — such as buildings and nests — on the collective behavior of humans and animals.

In one of the journal articles, on which Pinter-Wollman is lead author, she and her co-authors declare that the articles serve as the foundation for a new line of interdisciplinary research on the effects of architecture on collective behavior that have far-reaching scientific and practical implications. Of particular importance the researchers will share methods, theory and concepts across fields that cross traditional scholarly boundaries.

In a second article, on which she is also lead-author, Pinter-Wollman and her co-authors argue that the environment plays important roles in health and disease, in humans and animals. In humans, the environment affects chronic and infectious diseases. Throughout history, overcrowded and unsanitary urban living conditions have been linked with infectious diseases; mega-cities have been plagued with epidemics, and likely will be again. The physical environment is linked to chronic diseases, such as diabetes, heart disease, cancers, dementia, obesity and depression, she said, citing many studies.

Cul-de-sacs in the suburbs discourage, and lead to reductions in, walking. On the other hand, offices that provide space to park bikes and store bike helmets and gym clothes encourage greater physical activity. Spaces for parks, community centers and easy access to nature reduce stress, lead to increased interactions and positive mental health, and decrease isolation and loneliness.

The journal also includes research led by Ethan Bernstein, an assistant professor at Harvard Business School, on a company that removed its cubicles and placed its workers in open space. Among the findings: With no privacy, workers, perhaps surprisingly, decreased their face-to-face interactions and relied more on email to communicate.

"There's probably some good middle ground between having corridors with closed doors that don’t facilitate interaction and having open space with no privacy," Pinter-Wollman said.

One of the challenges of bringing together researchers from very different fields is finding a common language with which to discuss their work.

"Through my interactions with architects and cognitive scientists, I've learned a lot of words," Pinter-Wollman said. "For example, I now like using 'affordance,' which is the quality of an object that makes its use clear, like a door handle designed so that it is obvious one has to pull down on it to open the door. 'Bio-mimicry' refers to making buildings like habitats in nature. 'Space syntax' refers to a method for quantifying space."

Can people really improve the way they live from studying how animals live?

"Not everything can be translated from ants to humans, but there are some parallels, and identifying those parallels is a worthwhile goal," Pinter-Wollman said. "There are definitely things to consider when designing buildings that might not apply to animals. People need privacy, and emotions influence their well-being."

Pinter-Wollman wants to conduct studies and collect data, and not just rely on self-reports (which of course you can't do with animals; you can do so with people, although their self-reports could be biased, she noted). She uses a wide variety of techniques, including field studies, computer simulations, laboratory research and theoretical work, and draws from biology and other disciplines.

She serves on a UCLA advisory committee on the re-design of the university's botany building. When recommending where a coffee area should be located, she was inspired by her research on ants to help determine where interactions are most likely to occur; she recommended placing the coffee area close to exits.

"I hope we can create new space designs inspired from animals, but not replicating what they do; there's a middle ground," she said.