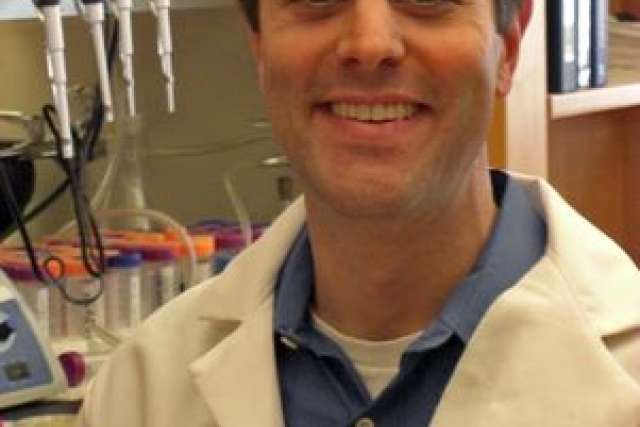 A new UCLA AIDS Institute study suggests the answer lies in a protein called interleukin-21 (IL-21), a powerful molecule released by immune cells during chronic infection. Published May 7 in the online edition of Science, the finding could explain how the immune system limits viral replication, restricting a virus's spread through the body.

The researchers looked at two types of T-cells — CD4 T-cells and CD8 T-cells — which are immune cells that play an important role in the body's response to infection. The CD4 T-cells help the immune system by producing IL-21 during chronic infection, bolstering the CD8 T-cells' ability to fight off the virus.

"The CD4 cells are the regulators — the generals, if you will," said principal investigator David Brooks, assistant professor of microbiology, immunology and molecular genetics at the David Geffen School of Medicine at UCLA. "The CD8 cells go out and kill the invaders; they're like the privates in the field."

To shed light on how CD4 T-cells help their CD8 counterparts clear viruses, the researchers infected mice with one of two strains of a virus. They knew that the first strain would generate a short-term infection and the second a chronic infection.

The scientists tested each strain on two groups of mice. One group was normal and the other was bred without IL-21 receptors.

In the normal mice, the first strain elicited a strong T-cell response that completely eliminated the virus in 10 days. The second strain caused a chronic infection that exhausted the T-cells, hampering their ability to fight the virus. The UCLA team detected high levels of IL-21 in these mice, suggesting that the protein plays a crucial role in sustaining the T-cells' ability to mount an immune response during long-lasting infection.

When the scientists infected the mice that lacked IL-21 receptors with the chronic infection strain, something curious happened. The majority of virus-fighting CD8 T-cells disappeared, preventing the immune system from containing the spread of the virus.

"IL-21 fuels CD8 T-cells' ability to function," Brooks said. "These immune cells are running a long-distance race to contain the virus before it spreads. If they don't get fed, they collapse on the track."

Without IL-21, the CD8 T-cells dwindled, even when the CD4 T-cells produced a robust response. The result indicates that the T-cells rely on IL-21 to resolve persistent infection.

"After the immune system loses CD8 T-cells, it's unable to clear the virus," Brooks said. "This tells us that IL-21 is a critical player in the body's fight against chronic infection."

The study was funded by the UCLA Center for AIDS Research, the Eli and Edythe Broad Center of Regenerative Medicine and Stem Cell Research at UCLA, and the National Institutes of Health. Brooks' co-authors included Heidi Elsaesser of UCLA and Karsten Sauer of the Scripps Research Institute.

The UCLA AIDS Institute, established in 1992, is a multidisciplinary think tank drawing on the skills of top-flight researchers in the worldwide fight against HIV and AIDS, the first cases of which were reported in 1981 by UCLA physicians. Institute members include researchers in virology and immunology, genetics, cancer, neurology, ophthalmology, epidemiology, social science, public health, nursing and disease prevention. Their findings have led to advances in treating HIV, as well as other diseases, such as hepatitis B and C, influenza and cancer.