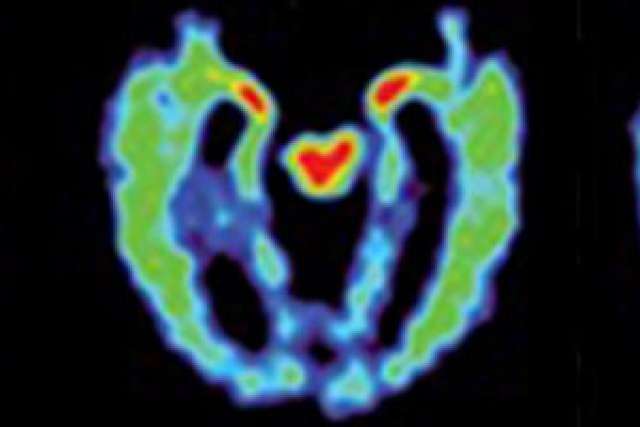 A new UCLA study takes another step toward the early understanding of a degenerative brain condition called chronic traumatic encephalopathy, or CTE, which affects athletes in contact sports who are exposed to repetitive brain injuries. Using a new imaging tool, researchers found a strikingly similar pattern of abnormal protein deposits in the brains of retired NFL players who suffered from concussions.

The innovative imaging technique uses a chemical marker combined with positron emission tomography, or PET scan, and was initially tested in five retired NFL players and described in an article published in 2013. Now, building on their previous work, the UCLA researchers found the same characteristic pattern in a larger number of retired players who had sustained concussions.

The latest study also shows that the brain imaging pattern of people who have suffered concussions is markedly different from the scans of healthy people and from those with Alzheimer’s disease. Researchers say the findings could help lead to better identification of brain disorders in athletes and would allow doctors and scientists to test treatments that might help delay the progression of the disease before significant brain damage and symptoms emerge.

The study appears in the April 6 online edition of the Proceedings of the National Academy of Science.

Currently, CTE can only be diagnosed definitively following autopsy. To help identify the disease, doctors look for an accumulation of a protein called tau in the regions of the brain that control mood, cognition and motor function. Tau is also one of the abnormal protein deposits found in the brains of people with Alzheimer’s, although in a distribution pattern that is different from that found in CTE.

“The distribution pattern of the abnormal brain proteins, primarily tau, observed in these PET scans, presents a ‘fingerprint’ characteristic of CTE,” said Dr. Jorge Barrio, senior author of the study and a professor of molecular and medical pharmacology at the David Geffen School of Medicine at UCLA.

The team identified four stages of deposits that could signify early to advanced levels of CTE.

“These different stages reflected by the brain marker may give us more insight into how CTE develops and allow us to track the disease over time,” said Dr. Vladimir Kepe, an author of the study and a research pharmacologist in molecular and medical pharmacology at the Geffen School of Medicine.

The new, larger study included 14 retired NFL players (including the five subjects from the earlier study), all of whom had sustained at least one concussion. Their results were compared with those of 19 men and nine women with healthy brains and 12 men and 12 women with Alzheimer’s disease of similar ages.

Participants received a scan using the UCLA-developed technique, which previously was used for assessing neurological changes associated with Alzheimer’s disease. The test involves injecting a chemical marker called FDDNP, which binds to deposits of neurofibrillary tau “tangles” and amyloid beta “plaques” — the hallmarks of Alzheimer’s. Then, using PET scans, the researchers were able to pinpoint where in the brain these abnormal proteins accumulated.

Participants also underwent MRI scans, neuropsychological testing, and neurological and physical exams to determine whether they had symptoms consistent with CTE, Alzheimer’s dementia or normal aging.

“We found that the imaging pattern in people with suspected CTE differs significantly from healthy volunteers and those with Alzheimer’s dementia,” said Dr. Julian Bailes, an author of the study and director of the Brain Injury Research Institute and the Bennett Tarkington Chairman of the department of neurosurgery at NorthShore University HealthSystem in Evanston, Illinois. “These results suggest that this brain scan may also be helpful as a test to differentiate trauma-related cognitive issues from those caused by Alzheimer’s disease.”

The PET scans revealed that the imaging patterns of the retired football players showed tau deposit patterns consistent with those that have been observed in autopsy studies of people with CTE.

In addition, the areas in the brain where the patterns occurred were also consistent with the types of symptoms experienced by some of the study participants.

Compared with healthy people and those with Alzheimer’s, the former athletes had higher levels of FDDNP in the amygdala and subcortical regions of the brain, which are areas that control learning, memory, behavior, emotions, and other mental and physical functions.

People with Alzheimer’s, on the other hand, had higher levels of FDDNP in areas of the cerebral cortex that control memory, thinking, attention and other cognitive abilities. And the athletes who had experienced more concussions also had higher FDDNP levels.

The next stage of the research will include multi-site studies and will follow subjects over time to determine how effectively FDDNP can detect possible CTE and predict future symptoms. Researchers also will expand the studies to include other groups of people affected by brain injury, such as military personnel.

Previous brain autopsy studies have shown that amyloid plaques are present in less than 45 percent of retired football players, most typically in those with advanced CTE. Most of the retired players in the new study did not have advanced CTE, which suggests that their FDDNP signal represents mostly tau deposits in the brain.

The scans of people with the highest levels of FDDNP binding in areas where tau accumulates in CTE, also show binding in areas of the brain affected by amyloid plaques, which is consistent with autopsy findings indicating that this abnormal protein also plays a role in more serious cases of CTE.

In the paper, the researchers note that the FDDNP PET scan is one of several methods — including blood-based biomarkers, diffusion tensor imaging MRI and resting state functional MRI — that are being studied by scientists across the country to help diagnose CTE early.

With more than 500 neuroscientists throughout campus, UCLA is a leader in research to understand the human brain, including efforts to treat, cure and prevent traumatic brain injury and brain disorders such as Alzheimer’s disease.

This study was supported by grants from the NIH (P01-AG025831 and M01-RR00865) and gifts to UCLA from the Toulmin Foundation and Robert and Marion Wilson. No company provided research funding for this study.

The FDDNP marker used with brain PET scans to identify abnormal proteins is intellectual property owned by UCLA and licensed to TauMark, LLC. UCLA authors Dr. Jorge Barrio, Dr. Gary Small and Dr. Sung-Cheng Huang are co-inventors of the PET marker. Barrio and Small have a financial interest in the company. Other disclosures are available in the manuscript.