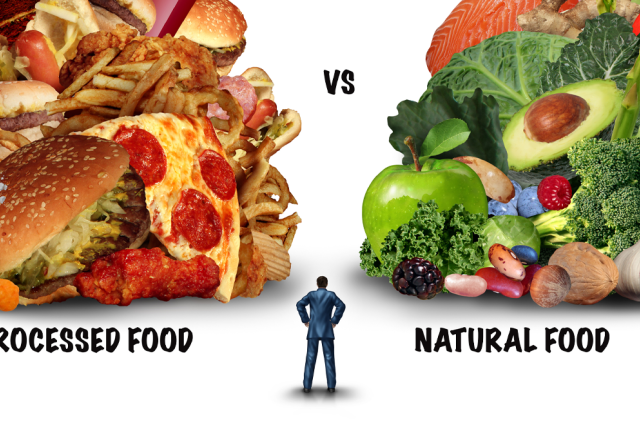 When you go to a grocery store, do you always consider the ingredients that are in the food you buy? Are you asking yourself whether the groceries are organic or processed?

Many people either don’t know or care whether the food they eat is processed. But a large number of processed foods have been linked to health problems such as heart disease, diabetes and certain forms of cancer.

Even when you go to your favorite fast-food chain, you are eating processed foods.

Michael Garcia, MD, a nutrition specialist at UCLA Health, said if people understand what processed foods are, they can make better decisions for their health.

“The broadest definition of processed food is any raw commodity that is altered from its natural state,” Dr. Garcia said. “The important thing to remember is there is quite a spectrum of processed foods, ranging from low to high. It could be anything from packaged spinach in a bag or a container all the way to a pastry or frozen pizza.”

Processed foods generally have been altered during preparation, whether by freezing, canning, baking or drying. Some processed foods contain high levels of fat, salt and sugar.

However, not all processed foods are bad. Broccoli is a very nutritive vegetable and even has cancer-fighting agents. Frozen broccoli in a bag is a form of processed food, but that doesn’t mean we should avoid eating it.

Dr. Garcia explained that a lot of processed foods are very good for us. Foods sold in containers – frozen vegetables and frozen fruit, for instance – are good processed foods, often frozen at the peak of their freshness. Canned produce, likewise, can be another good, relatively affordable, way to get your vegetables.

How do we know which foods are natural?

When people make the conscious decision that they want to start eating a healthier diet, they may start to ask questions about identifying natural foods.

Hanee Park, MS, RD, a registered dietitian in the UCLA Center for Human Nutrition, explained that the fewer ingredients, the more natural the product, in most cases.

Some common additives on ingredient labels you may want to avoid include hydrogenated vegetable oils and tropical oils such as palm oil, preservatives such as sodium nitrite or nitrate, flavor enhancers such as monosodium glutamate (MSG), and added sweeteners such as corn syrup, cane juice or artificial sweeteners, among others.

Park said it is the same when it comes to other foods, such as spinach. If you are buying a block of frozen spinach, you want the ingredient list simply to read spinach, with no additives, such as salt.

“Generally speaking, the shorter the ingredient list, the better. That means there is less processing involved,” Park said.

“When you look at a food item, ask yourself, ‘How close is it to its natural state?” Dr. Garcia added.

“When you look at the greens, the fruits and the vegetables, for the most part, they come in their natural forms. It’s the same thing with meat. It’s cut in different ways but still comes from the animal or its natural source.”

Below are some natural foods you might incorporate into your diet:

Why can it be hard to switch from processed foods to natural foods?

The power of advertising coupled with the sensation memory of our taste buds often makes it hard for us to leave the addictive shackles of processed foods. The additives, which include flavorings, salt and sugar, among others, have addictive qualities that bring the masses back for more.

“We taste something and then our brain interprets it as ‘good,’” Dr. Garcia said.

He continued: “Then we see that item or see an ad that gives us the same feeling or desire for that specific food. We can’t control how our body responds to that. It’s not something we can just switch off.”

There are more fast-food commercials on television than there are ads for healthy eating. Dr. Garcia attributes that to the economics of our country and the billions of dollars generated by high-profile fast-food operations.

Finances are another reason people find it hard to transition to a predominantly natural food diet. Healthier foods tend to be more expensive. This makes it hard to get fresh food all the time. However, there are low processed foods that people can target.

“Most people can’t grow their own food, so the next best thing is to get those loose fruits and vegetables from the store,” Dr. Garcia said. “If that’s not doable, then frozen fruits or vegetables is another option or you can buy frozen foods in bulk. Canned is another good option and there are some canned food brands that are not adding any additives to their products.”

Our dietary conditioning can form good or bad nutrition habits

It may be hard for people to switch to a more natural food diet because of the way they grew up, Dr. Garcia noted. People raised in a household where meals were traditionally prepared at home generally fair better as adults when it comes to preparing meals themselves, versus those who grew up eating out a lot.

Those fast-food habits can often lead to an addiction to processed foods. One of the best ways to stop eating processed foods is to prepare and cook your own meals at home.

How do I start to make a change from processed to natural foods?

Making changes to our diet is easier said than done. We often don’t know what our bodies are addicted to food-wise until we attempt to change our eating habits.

“Diet should be individualized. I recommend starting with an objective assessment,” Park said. “Creating a food diary is a good idea. It may sound tedious, but often you don’t realize what you’re putting in your body until you write down every single thing that you eat.”

“There are so many additives out there, but the big three that people should look out for when it comes to processed foods are saturated fat, added sugar and sodium,” Park said.

The Nutrition Facts labels are sometimes hard to read, but words such as “saturated fat” and “added sugar” should be red flags. Park said added sugars and saturated fats should account for less than 10% of total calorie intake. To estimate your daily calorie needs, you would have to know to how to measure your caloric intake.

A lot of processed foods already contain high amounts of sodium. When you are preparing processed foods that are high in salt and you begin adding blended flavorings or sugar, you are making matters worse, said Dr. Garcia.

“If you’re preparing organic meals at home, then you can add just plain spices that give you flavor without the added salt,” he said.

Said Park: “When it comes to sodium, it’s not just about the table salt you put in, but it’s also the MSGs or other additives that contain salt chemically. Overall, in a single day, you want your salt intake to be less than 2,300 mg.”

The American Heart Association (AHA) recommends that people should limit their sodium intake to 2,300 mg, which is equivalent to one teaspoon of salt.

Dr. Garcia and Park agree that information concerning processed and natural foods is evolving, as more nutrition studies are conducted.

“In the last five to 10 years a lot of the foods that were presumed to be healthy we’re starting to challenge a little more in regards to their ingredients. We’re having those discussions,” Dr. Garcia said.

Some foods that people commonly mistake as always being healthy are granola bars, flavored yogurts, certain protein drinks and bars, sports drinks, many gluten-free snacks and breakfast cereals. Many of these foods contain additives that are not necessarily healthy.

“There’s nothing accusatory,” he said. “We’re just having those discussions about new things we’ve learned when it comes to nutrition.”

To learn more about the difference between processed foods and natural foods, please visit the UCLA Center for Human Nutrition.