When the theme is collaboration, labs get moving

33 labs within David Geffen School of Medicine at UCLA pack up for new, central location 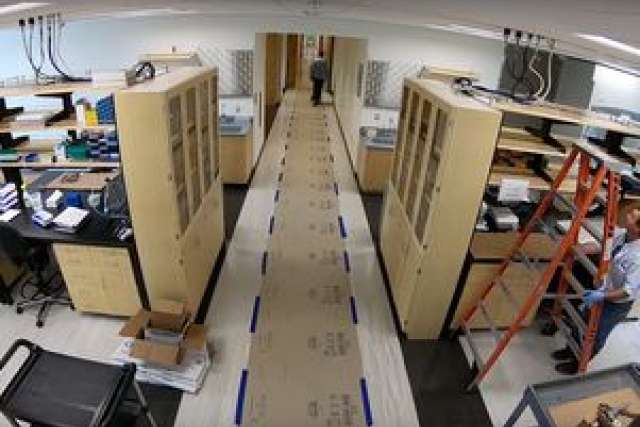 The move into the renovated South Tower of the Center for Health Sciences — completed this summer and just in time for a new academic year — was more than five years in the making.
September 10, 2018
Estimated read time: 5 minutes

Most people have, at one time or another, packed up all their belongings and lugged them to a new environment — a first dorm room, a bigger apartment, a different house.

Few people, though, have had to pack up multiple million-dollar scientific instruments, boxes upon boxes of test tubes, pipettes and beakers, and scores of experiments at various stages of completion. Hundreds of researchers at the David Geffen School of Medicine at UCLA recently did just that.

The logistics were not: Coordinating the move of 33 labs into a central location — in just longer than a month and with minimum disruptions and downtime for ongoing experiments — is, by any measure, a tall order.

The move into the renovated South Tower of the Center for Health Sciences — completed this summer and just in time for a new academic year — was more than five years in the making. It was precipitated by a fundamental rethinking of how best to use research space, beginning with the creation of the six Unified Research Themes: cancer; cardiovascular health; immunology, inflammation, infection and transplantation research; metabolism; neuroscience; and regenerative medicine.

"The idea of having research themes started in about 2012, and it came from the realization that there were so many big problems that we could address in biomedicine that would have big impact for health care," said Dr. Kelsey Martin, dean of the medical school. "There was a recognition that a lot of progress could be made if we took teams from different departments, even different schools, who worked across the spectrum from basic research through translational and clinical research."

Faculty in the UCLA Health Sciences have long benefited from close proximity and being able to simply walk across the street between research labs, the hospital and the clinics. This spirit of collaboration helped engender a commitment to the success of this new approach.

But then came the matter of space. No one could argue with the idea that collaboration is easier with shared space and shared interactions.

Fortunately, the medical school had that space — 80,000 square feet of it — and its leadership had the vision to make the most of it.

UCLA Medical Center had moved across the street in 2008 to state-of-the-art facilities now known as the Ronald Reagan UCLA Medical Center. That left its former home open, if not quite ready, for new opportunities. At universities, as in home-buying, location matters, and the building was (and is) centrally located in the heart of the medical campus.

"When the space became available in what was the old hospital, there was a real opportunity to say 'We're going to cluster people together based on the questions they are interested in, not based on the department that they are assigned to,'" Martin said.

And so, one enormous renovation later, it began — the move of 33 labs into 80,000 square feet of freshly renovated, beautifully lit and strategically arranged research space.

Brenna Tam, a senior public administrative analysist in the medical school, led the charge. To understand what's involved, she said, consider that:

But it got done – in just over a month and with no personnel blow-ups or major problems.

"Even though it's a stressful time — picking up sensitive equipment it and moving it — the researchers were very excited and very understanding of any issues such as a temperature-control problem or something of that nature," Tam said. "Their attitude was: This is going great, the space looks wonderful, thank you for the wonderful setup."

And set-up it now is.

"If you look back at institutions around the world that were great in certain areas of science and had a clustering of Nobel Prize winners, they had a common feature. And that was they always had some common space where everybody got together once a week, once a day — and it was informal. They had a chance to interact," said Dr. John Mazziotta, vice chancellor of UCLA Health Sciences. "So the idea of proximity and putting people who had similar scientific missions, but weren't necessarily in the same discipline together made sense."