Obesity poses serious health risks for moms and their babies 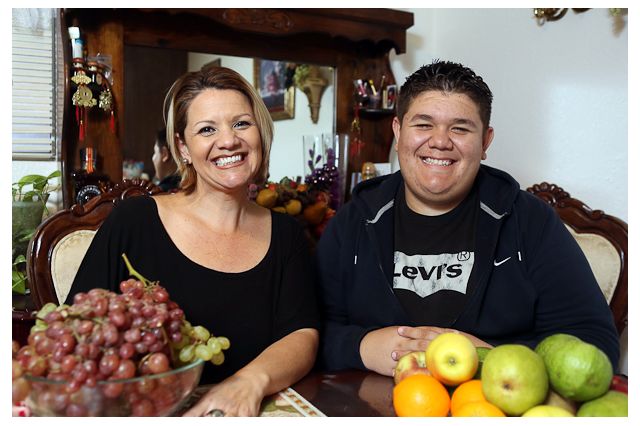 Veronica Romero has struggled to let go of the feeling that she was somehow responsible for her son Anthony's weight problems. She has since lost 150 pounds after undergoing gastric-bypass surgery at UCLA; Anthony is losing weight after enrolling in UCLA's Fit clinic. Photo by Ann Johansson

Veronica Romero was 21 years old and worried. Pregnant with her first child, she was putting on a lot of weight. Her obstetrician leveled with her: “You’re gaining too much.” But as she approached 50 pounds of weight gain near the end of her pregnancy, Romero felt helpless.

“I tried to watch what I was eating, but it was so hard. Pregnant women get cravings, and my cravings were sugary,” she recalled.

“I tried to eat carrots and small appetizers, but it didn’t work. I was disappointed. I didn’t want to get bigger.” The pregnancy set into motion a health crisis on two fronts: for Romero, now 38, and her son, Anthony, now 17. Romero eventually grew to nearly 300 pounds, and Anthony became a big baby, then a chubby toddler and now an obese adolescent.

This mother-child pair is not unique. The obesity tsunami that has washed across the United States over the past four decades has swept up pregnant women and their offspring too. In fact, pregnant women today are considered by some medical authorities to be at the nexus of the obesity crisis. Abundant research has revealed that pregnancy is a key period of increased risk for developing obesity in women and that obesity in pregnancy may genetically “program” offspring to become overweight or obese later in life.

The concept, commonly known as fetal programming, is rapidly altering the fields of obstetrics and pediatrics, said Dr. Sherin Devaskar, Mattel Executive Endowed Chair of the Department of Pediatrics, physician-in-chief of UCLA Mattel Children's Hospital and assistant vice chancellor of children’s health. “There have been many studies to prove beyond a doubt that fetal programming is real. If a mother is obese, her babies are at very high risk for obesity and chronic disease.”

In the United States, more than half of all pregnant women are overweight or obese, according to the American College of Obstetricians and Gynecologists. An estimated 9 percent of babies are born macrosomic — weighing too much for their gestational age. Fetal macrosomia is typically defined as a birth weight of more than 9 pounds, 15 ounces, regardless of gestational age.

However, obesity in pregnancy can also result in babies who are born prematurely or underweight. These infants also seem to be predisposed to obesity and related diseases, such as diabetes and heart disease, later in life, Devaskar explained.

More than three decades ago, Dr. David Barker, a British physician and epidemiologist, linked birth weight, either excessively high or low, to a heightened risk of heart disease, type 2 diabetes and obesity in offspring. He posited that these diseases had their roots, at least in part, in under- or over-nutrition during pregnancy. If a pregnant woman is under-nourished, her infant is prone to low birth weight with a rapid “catch-up” gain in body fat later when exposed to plentiful food. If a pregnant woman is over-nourished, her infant is prone to high birth weight and a booming growth trajectory that increases the risk of obesity later in life.

The amount of nutrients provided to a developing fetus, as well as the type of nutrients, appears to chemically modify genes that predispose a child to obesity and obesity-related diseases, said  Devaskar, whose own research on the subject resulted in her election to the prestigious Institute of Medicine in 2012. Her current research focuses on whether or not it’s possible to further modify those genes to reverse the propensity to gain weight. “In the fetus, the organs are still developing,” she explained. “It’s a critical window of development, and it’s very plastic at that time. Any insult — whether it’s from diet, drugs or toxins — creates a permanent mark that lasts for one’s lifetime. The hypothalamus — the part of the brain governing metabolism and hunger — is already programmed. The infant is used to seeing so much nutrition coming from the mother. These children are ever-hungry; they are born hypersensitive to high-calorie foods. Their insulin sensitivity is low, so they are at high risk for developing diabetes, obesity and heart disease.”

In 2009, the Institute of Medicine issued revolutionary new guidelines to begin to address obesity in pregnancy. The group put tighter limits on weight gain in pregnancy, warning doctors to help their patients stay within a healthy range and even strictly limit weight gain in obese pregnant women to 11 to 20 pounds.

“It’s a major change,” said Dr. Aisling Murphy, assistant professor in the Division of Maternal-Fetal Medicine. “More recent data have suggested that obese women really don’t need to be gaining as much weight as women who enter pregnancy at a normal weight.”

Moreover, doctors are encouraging pregnant women to exercise — something many women had been fearful of doing. “Sometimes, women are under the impression that they shouldn’t be walking or going to the gym when they are pregnant. That is not the case,” Murphy said. “They really should be active.”

Obesity during pregnancy also raises the risk of some types of birth defects and other complications, such as an increased risk of Cesarean section or complications during childbirth, Murphy noted.

While two decades ago, few pregnant women were given extra resources and support they needed to manage weight gain, overweight or obese women who are planning to have children are now encouraged to seek pre-conception counseling, where they are given advice and resources to help them lose weight before becoming pregnant. And pregnant women who are obese are typically referred to a registered dietician for assistance with a healthy diet. Breastfeeding for at least six months is highly recommended to help the mother lose weight.

“If we can take care of young women before pregnancy and during pregnancy, we will end up with a healthier society, and it will bring down health care costs dramatically,” Dr. Devaskar said.

Read the complete story in the latest issue of U Magazine.