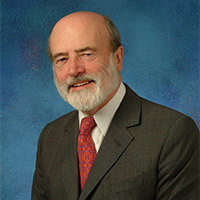 Dr. Peter C. Whybrow is the Judson Braun Distinguished Professor in the Department of Psychiatry and Biobehavioral Sciences at UCLA at the David Geffen School of Medicine at UCLA.

Born in England, Dr. Whybrow received his training in endocrinology and psychiatry in London and North Carolina. He was a member of the scientific staff of the British Medical Research Council before coming to the United States to join the faculty of Dartmouth Medical School as chairman of psychiatry, and later as executive dean. Prior to joining the faculty at UCLA, Dr. Whybrow was the Ruth Meltzer Professor and Chairman of the Department of Psychiatry at the University of Pennsylvania.

Peter C. Whybrow, MD click here to update your profile
Back to search