A three-drug combination researched by an international team of UCLA-led scientists could prove to be an effective new therapy for people with a specific type of advanced melanoma. The approach shows promise for extending the lives of people with a type of melanoma that contains a potent gene mutation, BRAF V600E. In clinical trials, it appeared not to cause the debilitating side effects that are caused by a combination of one targeted drug and an immunotherapy drug.

The researchers found that people with the melanoma survived longer without the cancer progressing or growing when they received a combination of two targeted inhibitors that block the BRAF mutation — dabrafenib and trametinib — and an immune checkpoint inhibitor drug — pembrolizumab — as the initial treatment for their disease.

Darkly pigmented nodules and lesions, arising from a patch of irregularly pigmented flat brown patches on the cheek of an elderly woman with lentigo maligna melanoma. Image: Medical Images

“Utilizing the three drugs together sensitized the patient’s own immune system to bolster the power of immunotherapy and block the growth of two genes — BRAF and MEK — that cause cancer cells to reproduce and grow out of control,” says Antoni Ribas, MD, PhD, professor of medicine at the David Geffen School of Medicine at UCLA and director of the UCLA Jonsson Comprehensive Cancer Center’s Tumor Immunology Program.

Previous studies have found that using one of the three drugs alone can dramatically shrink tumors in a small percentage of people with melanoma. A majority of people on the treatment, however, do not see any benefit or end up experiencing a relapse. Two-drug combinations also have been tested, but they, too, have had limited success. “Earlier attempts to combine a targeted agent with an immune checkpoint inhibitor as a double-combination therapy had debilitating side effects for patients, and it was just too toxic to continue testing, so we went back to the drawing board,” says Dr. Ribas, who also is director of the Parker Institute for Cancer Immunotherapy Center at UCLA and a member of the Eli and Edythe Broad Center of Regenerative Medicine and Stem Cell Research. “We found that by using two targeted inhibitors, instead of just one, in combination with a checkpoint inhibitor, we could safely and effectively treat the cancer.” 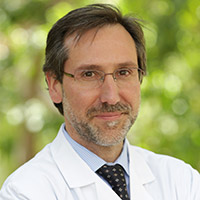 The results of the triple therapy, Dr. Ribas says, are so much more encouraging than double-therapy combinations with these drug agents. “With this triple combination, we are doing two things at once: using the two inhibitors to block the cancer from spreading and stimulating the immune system. An immune response has the ability to remember foreign invaders and help protect the body from similar infections in the future, so enlisting an immune response to the cancer is aimed at having more durable responses to the therapy.”

Previous
Herceptin has saved countless women’s lives and earned UCLA’s Dr. Dennis Slamon the Lasker Award
Next
CAR T clinical trial aims at extending the lives of people with most common types of lymphoma and leukemia