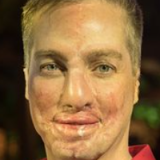 Marine Corporal Aaron Mankin enlisted in 2003 at the onset of conflict in Iraq and served as a Combat Correspondent. On May 11, 2005 he survived one of the largest improvised explosive device attacks of the war. Six Marines gave their lives and 11 others were wounded while Cpl. Mankin suffered 3rd degree burns which disfigured his face, arms and hands.

Two years later, Cpl. Mankin became the very first patient at UCLA’s Operation Mend. This nonprofit organization offers reconstructive surgeries to veterans and mental health support for them and their families. He has endured nearly 70 surgeries and countless procedures so far.

Throughout his recovery, he has remained a passionate advocate, supporting service members and veterans as a spokesperson for Operation Mend, the Intrepid Fallen Heroes Fund, the Injured Marine Semper Fi Fund as well as Iraq and Afghanistan Veterans of America. It’s through those organizations and his diligence, that he’s addressed and stimulated significant change on a national level with issues such as the VA backlog, veteran’s suicide and fostered Veterans Preference Bills in his home state of Arkansas.

Cpl. Mankin’s resilient spirit has been recognized by many prestigious organizations. In 2008, the USO named him Marine of the Year and awarded him the George Van Cleave Military Leadership Award. In 2009 he was named one of People Magazine’s Heroes of the Year. Cpl. Mankin conferred with then Secretary of Defense, Leon Panetta, on matters affecting wounded veterans. In 2012 he was invited by the Obamas to a White House State Dinner to represent over one million veterans who have served in Operation Iraqi Freedom and Operation New Dawn. That same year he was presented a Leadership Award at the GQ Gentleman’s Ball. In 2013 he was honored by the Rogers Public Education Foundation in his hometown as an outstanding graduate by being inducted to the organizations Wall of Distinction. During the general election of 2016, Cpl. Mankin was asked to speak at the first ever Commander in Chief Forum.

Now, 14 years later, Mankin resides in his hometown of Rogers, Arkansas with his two children, twelve-year-old-daughter Madeline and eleven-year-old-son Hunter. Mankin has just recently concluded Fellowship from the United States Congress where he served as the Military and Veteran Liaison to the Third Congressional District of Arkansas. He continues to share his story.