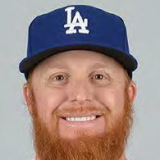 Since joining the Dodgers in 2014, Justin Turner has been a pillar of the team’s community efforts, giving his time, energy and financial support to a variety of charitable efforts throughout the Los Angeles area. Turner is a leader in the Dodger clubhouse, both for the way he plays the game of baseball and also for the example he sets for his teammates off the field.

Justin, who was nominated by his teammates for the MLB Player Association’s Marvin Miller Man of the Year Award in 2015 & 2016 not only makes community appearances on behalf of the team, but frequently schedules his own visits to UCLA, CHLA, and Cedars-Sinai Hospital to spend time with patients and to the Los Angeles Dream Center – a nonprofit that assists homeless families with residential, foster care, medical, life skills and other services. He is also a two-time recipient of the Roy Campanella Award, which is given to the Dodger player who best exemplifies the spirit and leadership of the late Hall of Fame catcher. In addition, he was named the 2018 nominee for the Bob Feller Act of Valor award, the first-of-its-kind linking the United States Navy and the professional baseball world, the Bob Feller Act of Valor Award was created in 2013 to recognize individuals for possessing the values, integrity and dedication to serving our country that Bob Feller himself displayed.

This spirit of service led to the creation of the Justin Turner Foundation in 2016, whosemission is to support homeless veterans and children (and their families) battling life-altering illnesses. This past offseason, Turner hosted his 4th annual Justin Turner Golf Classic in his efforts to support the Dream Center's Veterans Program. Through his efforts, the Dream Center is able to house and mentor over 26 veterans. Turner recently helped fund and support the opening of the Dream Center’s Women Veteran Program. The 18-bed transitional housing program provides support, job & skill training, mentoring, outreach opportunities, classroom-based instruction, employment resources, and benefit assistance.

Additionally, since its’ founding, the Justin Turner Foundation has provided over 10,000 toys and 2,000 bicycles to children in the Los Angeles area through its’ holiday giving efforts. Justin also partners with the 17Strong Foundation, founded by Ryan Teixeira and carried on by his family and loved ones, which is built on giving patients that are recovering from a life-altering illness a victory trip of their choice. Turner is currently working with the Yokota Air Base in Fussa, Japan to help create a baseball league for U.S. military children whose parents are serving in the military.

During his time with the club, Turner has been an ardent supporter of the Dodgers’ community efforts, from volunteering at youth clinics and soup kitchens to serving as spokesman for Vision to Learn, a partner of the Los Angeles Dodgers Foundation that provides free eye exams and glasses to schoolchildren in underserved communities. He’s also been the Dodgers’ player representative in support of MLB programming, including Play Ball and National PLAY Campaign events. Turner serves as the spokesman for the club’s Military Appreciation Night and when the Dodgers honor a Military Hero of the Game each night, Turner can be found next to the dugout rail, greeting the service man or woman to present them with an extra- memorable experience. Additionally, each year he’s been with the Dodgers, Turner has supported the annual AM570 Help-A-Hero radiothon by appearing in studio and taking pledges to raise money for the Veterans Program. Last year’s radiothon was a great success, raising over $270,000 for those in need.

This past Spring, Turner was named the 34th Annual LA Marathon’s honorary race starter and official ambassador. The Justin Turner Foundation was also named one of the official charities of this long-standing SoCal tradition. The morning of race day, Justin was present at Dodger Stadium to welcome all the participants and could be found throughout the day cheering on the runners along the race route and concluding in Santa Monica at the finish line.

Turner’s caring nature and unique ability to connect with people from differing backgrounds is what truly sets him apart from others. While a member of the Mets, he connected with Luke Lang, a young cancer patient, during batting practice at Citi Field and the two have remained friends ever since. Turner has flown Luke and his family out to Spring Training in Arizona and Dodger games in Los Angeles, while also honoring the Langs at his charity golf tournament.

Justin enjoys creating these types of experience for many special fans and their families. Turner is active on multiple social media platforms, which has helped him connect with fans and discover worthy charitable causes. On January 22, 2019, the Los Angeles City Council declared it “Justin Turner Day” in LA, to recognize his contributions in the community.

A native Angelino, Turner has furthered his ties to the community and used his platform to promote positive change in his hometown. Although he is a great success on the diamond, it has been his work off the field that has made him a fan favorite and an All-Star in the community. This impact will surely last well after the final out.