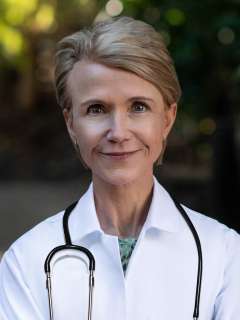 Barbara Natterson-Horowitz, M.D., develops bio-inspired strategies for understanding and addressing human health challenges. Her work focuses on the natural world and evolutionary biology as sources of insight for health and development. A Professor of Medicine in the UCLA Division of Cardiology and on faculty at Harvard University's Department of Human Evolutionary Biology and Harvard Medical School, she co-directs the UCLA Evolutionary Medicine Program.

Her Phylogeny Lab studies the natural world as a source of insights to improve health and development. Dr. Natterson-Horowitz recently launched Female Health Across the Tree of Life, a research initiative bringing together leaders in Women’s Health, One Health and Planetary Health.

She is actively involved with education teaching undergraduates and graduate students at UCLA and Harvard, developing courses which use evolutionary and comparative approaches to help medical students better understand physical and mental illnesses.

Dr. Natterson-Horowitz supervises the independent research of many undergraduates and graduate students as co-director of the UCLA Evolutionary Medicine Master's degree program, as a faculty advisor on the UC-HBCU grant, and as supervising faculty advisor for Harvard undergraduate theses.

In 2018, she first offered Coming of Age on Planet Earth, a course which uses a comparative and evolutionary frame to better understand the transition from adolescent to adult life across species.

Dr. Natterson-Horowitz studied evolutionary biology as an undergraduate and graduate student, receiving bachelor's and master's degrees from Harvard. She attended UC San Francisco for medical school followed by post-graduate training at UCLA including internal medicine residency and chief residency, and cardiology fellowship with advanced training in heart failure and cardiac imaging. She has been a member of the UCLA Division of Cardiology since 1993 and served as Director of Imaging for the UCLA Cardiac Arrhythmia Group.

In 2012, she published the NY Times bestselling book, Zoobiquity, with co-author Kathryn Bowers, which makes the case for a species-spanning approach to health. Zoobiquity was a Finalist in the American Association for the Advancement of Science (AAAS)'s Excellence in Science Books Award, Smithsonian Top Book of 2012, Discover Magazine Best Book of 2012, and the China Times Best Book of 2012. It has been translated into ten languages and has been the common read at universities across the country.

In September 2019, Dr. Natterson-Horowitz delivered the keynote at the Nobel Assembly's Nobel Conference in Stockholm, Sweden. The theme of the 2019 conference was the identification and application of scientific insights from the natural world to human health. In the same month, her and Bowers' second book, Wildhood, was published. A New York Times Book Review Editor’s Pick and winner of the Association for Science Education Book of the Year Award, Wildhood chronicles the transition from juvenile to adult biology and behavior across the Metazoan lineage.

I develop interdisciplinary programs that bring together the fields of veterinary medicine, human medicine, evolutionary and wildlife biology to explore the potential for a species-spanning approach to health. The potential for comparative clinical medicine and evolutionary medicine to yield new approaches and novel hypotheses for important health challenges is only now emerging. Some of the initiatives I have developed to expand the interface between these related but too often disconnected fields have included: