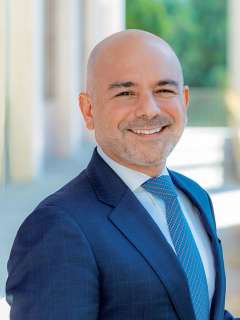 He was named intern, junior resident, and senior resident of the year during all three years of his residency training. He completed his gastroenterology fellowship at UCLA where he also obtained a masters of public health degree with the assistance of an NIH sponsored training grant. He is also a graduate of the Executive Program in Management from the UCLA Anderson School of Management. Dr. Esrailian served on the Medical Board of California from 2010-2011 after being appointed by Governor Arnold Schwarzenegger.

In 2012, the School of Medicine awarded him the Lincy Foundation Chair in Clinical Gastroenterology. He is closely involved in growth strategy and strategic planning efforts for UCLA Health and the David Geffen School of Medicine at UCLA. He also works to facilitate community engagement with a number of other schools and departments within the UCLA campus and its Los Angeles community partners, and he was on the UCLA campus steering committee for the Centennial Campaign. He is now one of the co-chairs for the Second Century Council for the university. In 2020, he launched the UCLA Leaders of Tomorrow series to emphasize essential leadership skills through some of the most influential and successful leaders in our community. Dr. Esrailian was named the 43rd Annual Lester Breslow Distinguished Scholar and Lecturer by the UCLA Fielding School of Public Health. In 2017, the university designated Dr. Esrailian as a UCLA Optimist—among its notable alumni and faculty dedicated to solving the world's problems.