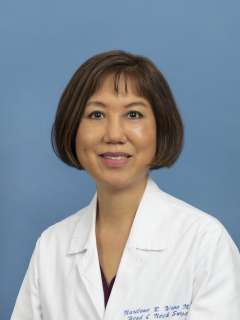 Marilene B. Wang is a head and neck surgeon who is currently a Professor in the Department of Head and Neck Surgery at UCLA School of Medicine and has been a faculty member here since 1992.

Dr. Wang earned her B.A. in Mathematics with highest honors at La Sierra University, Riverside, CA in 1982. She earned her M.D. at Loma Linda University School of Medicine, Loma Linda, CA in 1986 and graduated first in her class of 134. She completed her residency in Head and Neck Surgery at UCLA in 1992.

She is committed to medical student and resident education both in the clinical setting and in the laboratory. She has mentored many students and residents in her head and neck cancer research laboratory, and several have won prestigious awards for their projects in the laboratory, including the Shirley Baron Award from the Western Section of the Triological Society, a Basic Science Award for resident research from the American Academy of Otolaryngology--Head and Neck Surgery, and a First Place Award for the Poster Session of the Triological Society.

She specializes in treatment of nasal and sinus diseases, skull base tumors, head and neck cancer, thyroid/parathyroid disease, and snoring/sleep apnea.

She utilizes minimally invasive endoscopic techniques for sinus surgery and removal of sinonasal tumors, including endoscopic removal of skull base tumors, juvenile nasal angiofibromas, inverting papillomas, and selected malignancies. She also is active in the Pituitary Tumor and Endosopic Neurosurgery Programs.

"I have sinus headaches all the time. What can I do about them?" | Sinus Issues
"I keep on geting sinus infections. Is there anything I can do to prevent them?" | Sinus Issues
"I had surgery for nasal polyps and they came back. Will another surgery get rid of them or do they always come back?" | Nasal Polyps
"I can't smell things very well anymore. What could be wrong?" | Nasal Problems
"I can't breathe well through my nose. What could the problem be?" | Nasal Problems
"My nose bleeds a lot and it takes a long time to stop. What can I do?" | Nasal Problems
"After removing the pituitary tumor through my nose will I still be able to breathe through my nose?" | Pituitary Surgery
"Why is a head and neck surgeon involved in my pituitary surgery?" | Pituitary Surgery

Dr. Wang has a research laboratory whose focus is to explore the molecular basis for the development and progression of head and neck squamous cell carcinoma (HNSCC). Advanced head and neck cancer carries a poor prognosis, and a goal of this lab is to search for more effective and less toxic treatments for this devastating disease.

Dr. Wang has funding from the National Cancer Institute/National Institutes of Health for her research.