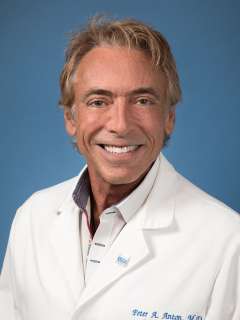 Dr. Anton’s research focuses on the degree of mucosal inflammation and altered co-receptor expression associated with HIV infection and associated therapeutic interventions, the potential use of the mucosa as a route of HIV immunization with various HIV vaccine candidates as well as microbicides for HIV mucosal prevention, investigating the interaction of HSV and HIV in mucosal pathogenesis and efforts to clarify the role of compartments in HIV pathogenesis.

He has been PI on over 30 clinical trials including two Phase I HIV vaccine trials and two Phase I anti-HIV topical microbicide trials. He recently completed research as PI of the NIH IPCP U19 award “Microbicide Development Program” (MDP), with national/international sub-study sites, focusing on a developmental pipeline for rectal microbicides. These rectal microbicide efforts have continued with both the Clinical Trials Project within the second IPCP U19 Combination HIV Antiretroviral Rectal Microbicide (CHARM) which has six exploratory pre-Phase I microbicide trials and JHU’s DREAM project. His research has expanded into delayed-release vaginal drug delivery and IM/injectable drug delivery with Oak Crest Institute of Sciences’ U19 and Northwestern University’s UM1 SLAP-HIV.