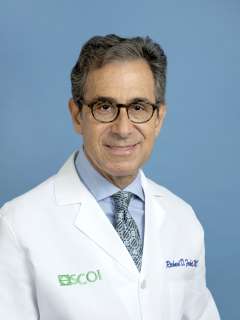 Dr. Ferkel grew up in Illinois and attended UCLA where he played football for two years. Subsequently, he graduated from Northwestern University Medical School in Chicago and accomplished his orthopedic training at UCLA.

He completed fellowship training in sports medicine and reconstructive knee and shoulder surgery at the Southern California Orthopedic Institute and had additional training in foot and ankle surgery at that time.

He is currently the director of the sports medicine fellowship program at Southern California Orthopedic Institute. Dr. Ferkel has published numerous articles regarding the shoulder, knee, foot and ankle, and sports medicine. He co-edited the book, "Prosthetic Ligament Reconstruction of the Knee," and authored the textbook "Arthroscopic Surgery of the Foot and Ankle." He lectures extensively all over the world. In addition, he has invented numerous surgical devices and performed live surgery throughout Europe. He has received numerous awards and was selected to be in the book entitled "The Best Doctors in America."

Dr. Ferkel is an Assistant Clinical Professor of orthopedic surgery at UCLA and was chief of arthroscopic surgery at Wadsworth Veterans Hospital for fifteen years. He is a member of the Arthroscopy Association of North America, American Orthopaedic Society for Sports Medicine, International Society for Arthroscopy, Knee Surgery and Orthopedic Sports Medicine, and the American Orthopaedic Foot and Ankle Society.

He is a qualified medical examiner (QME) for the State of California Industrial Medical Council, Department of Industrial Relations.

Dr. Ferkel started the Athletic Training Program at Southern California Orthopedic Institute. In addition, he has been the team physician for Crespi Carmelite, Oaks Christian, and Harvard-Westlake High Schools, and Los Angeles Valley College for many years. He has worked with the U.S. Olympic teams, specifically the U.S. Soccer Team, the Special Olympics, and is a consultant to the NFL, MLB, and NBA.

Outside of the office, Dr. Ferkel enjoys playing tennis, skiing, drumming and spending time with his family. He also assists in fundraising for a variety of charities.