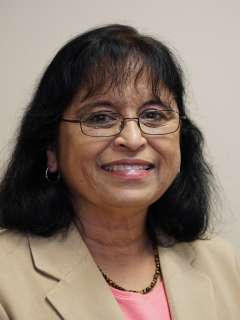 Dr. Sherin U. Devaskar is Executive Chair of the Department of Pediatrics at UCLA.

Sherin U. Devaskar, MD is Distinguished Professor of Pediatrics, Mattel Executive Endowed Chair of the Department of Pediatrics at the David Geffen School of Medicine at UCLA. She is the Physician-in-Chief, Mattel Children's Hospital UCLA, and Assistant Vice Chancellor of Children's Health, UCLA Health. She is also the Executive Director of the UCLA Children's Discovery and Innovation Institute (CDI).

Dr. Devaskar is a highly accomplished pediatrician/neonatologist, researcher and educator. She was selected as the recipient of the 2021 John Howland Award and Medal for Highest Achievements in promoting child health as a leader, physician-scientist, mentor and clinician-educator.

Dr. Devaskar has dedicated her life towards unraveling mechanisms underlying the connections between the intra-uterine environment and postnatal origins of disorders in children and subsequently in adults. She has unraveled multiple molecular pathways ranging from epigenetics to function of key proteins involved. Most recently, she has employed -omics towards developing diagnostic strategies in pregnant women and infants, embracing prediction models and analysis, for the benefit of children. Her research is supported by National Institutes of Health (NIH). Dr. Devaskar has authored over 165 publications in peer-reviewed journals.

Dr. Devaskar has a particular interest in academic development and focuses on supporting and mentoring fellows and junior faculty interested in becoming physician-scientists, clinician-researchers or educators. Dr. Devaskar serves on multiple UCLA, national and international committees. She received the Maureen Andrew Award for outstanding mentorship in 2008, served as the Program Chair for the Pediatric Academic Society in 2006-2007, and President of the American Pediatric Society in 2009-2010. She was the Editor-in-Chief for the Pediatric Research Journal from 2004-2010, and a member of the International Pediatric Research Foundation board 2010-2015. She was inducted into the the American Society ofClinical Investigation in 1997 and National Academy of Medicine in 2012.

In addition, her service includes being a member of the National Advisory Child Health and Human Development Council, Chair of the NIH Pregnancy and Neonatology Study Section, and the NICHD Maternal and Child Health Committee, and as a member of the NIH Human and Embryology Study Section, and member of the Neonatal-Perinatal sub-boards at the American Board of Pediatrics. Most recently, she served as the President of Association of Medical School Pediatric Department Chairs (AMSPDC) from 2019-2021 and currently serves as a member of the National Public Policy committee representing AMSPDC. She continues to dedicate herself to science and its applicability to the health of children, with an eye on the future. She continues to mentor many in pursuing an investigative career or a career in Pediatrics along multiple trajectories.

More locally, she is known to Pediatricians and Families in the Los Angeles Area, given herpassion for providing the best and safestcare in a family centered manner for babies and children and has worked tirelessly to make this happen.