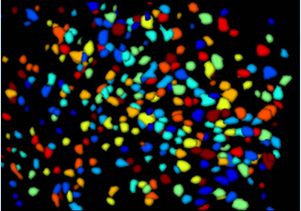 Using a miniature microscope that opens a window into the brain, UCLA neuroscientists have identified in mice how the brain links different memories over time. While aging weakens these connections, the team devised a way for the middle-aged brain to reconnect separate memories.

The findings, which were published today in the advance online edition of Nature, suggest a possible intervention for people suffering from age-related memory problems.

“Until now, neuroscientists have focused on how the brain creates and stores single memories,” said principal investigator Alcino Silva, a professor of neurobiology at the David Geffen School of Medicine at UCLA. “We wanted to explore how the brain links two memories and whether the passage of time affects the strength of the connection.”

“In the real world, memories don’t happen in isolation,” said first author Denise Cai, a researcher in Silva’s lab. “Our past experiences influence the creation of new memories and help us predict what to expect and make informed decisions in the future.”

In an intricate experiment, the UCLA team tested in young and middle-aged mice whether the brain linked memories of experiences separated by five hours versus seven days.

The lab used a miniature microscope, called a Miniscope, which was developed by UCLA neuroscientists Dr. Peyman Golshani, Baljit Khakh and Silva with funding from the presidential BRAIN Initiative and the Geffen School. The instrument’s powerful camera allowed the scientists to peer into the brains of young mice and observe their cells in action. The tiny, head-mounted microscope illuminated the animals’ neurons firing as the mice moved freely in their natural environments.

For 10 minutes at a time, each mouse was placed in three boxes, all unique in terms of fragrance, shape, lighting and flooring. A week’s time separated placement in the first and second boxes. Only five hours separated time spent in the second and third boxes, where the mouse later received a small shock to the foot.

Two days later, the team returned each mouse to all three boxes. As expected, the mice froze with fear when it recognized the inside of the third box.

What happened next, however, came as a surprise.

“The mouse also froze in the second box, where no shock occurred,” Silva observed. “This suggests that the mouse transferred its memory of the shock in the third box to its experience in the second box five hours earlier.”

When Silva and Cai examined the animals’ brains, the neural activity confirmed their hypothesis.

“The same brain cells that recorded the mouse’s shock in the third box also encoded its memory of the second box a few hours earlier,” Cai said. “We saw 20 percent more overlap in the neural circuits that recorded the animal’s experiences in the memories that unfolded closer in time.”

In other words, says Silva, “The memories became interrelated in how they were encoded and stored by the brain, such that the recall of one memory triggered the recall of another memory related in time.”

Based on an earlier Silva finding, the team knew that a cell is most likely to encode a memory when it’s aroused and ready to fire. Neuroscientists refer to this condition as excitability.

“The excitable brain is already warmed up,” Silva said. “It’s like stretching your muscles before exercise or revving your car engine before you drive.”

Suspecting that aging weakens neurons’ ability to fully excite, the UCLA researchers conducted a similar experiment in middle-aged mice. They introduced each of the mice to two boxes, five hours apart, and administered a foot shock in the second box.

When they returned the animals to the boxes two days later, the results could not have been more clear-cut.

“The older mice froze only in the box where they had received a shock,” Cai explained. “They did not react in the first box.”

A glimpse into the Miniscopes confirmed that the brains of the mice did not connect the two memories; each memory was encoded on its own neural circuit.

Next the team focused on boosting the older animals’ ability to link memories. Cai used a biological tool to excite neurons in a tiny part of the hippocampus — the memory center of the brain — before introducing the mice to the first box.

She stimulated the same cells before placing the mice in the first box and the second box, where they received a foot shock two days later.

“The proof in the pudding arrived when we reintroduced the middle-aged mice to the first box,” Silva said. “The animals froze — they now linked the shock that happened in the second box to the first. This suggests that increased excitability had reversed their age-related inability to link memories.”

Cai and Silva are currently testing an FDA-approved drug’s effect on the ability of middle-aged mice to connect memories.