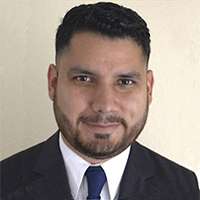 Dr. Jaime Acosta was born and raised in San Salvador, El Salvador, where he graduated from the Universidad Evangélica de El Salvador. As part of his medical school education, he was assigned to multiple community clinics in the rural areas of his country where he completed his social service.

After graduation in 2010, Dr. Acosta worked in various primary care clinics caring for patients of all ages. In 2011, he moved to San Diego, California and worked with several community outreach programs, including assisting as a translator for a University of California, San Diego Student Run Free Clinic. In May 2016, Dr. Acosta was accepted as a UCLA scholar to the UCLA International Medical Graduate Program. Dr. Acosta is looking forward to joining the San Joaquin Family Medicine Residency Program where he will utilize his bicultural background, language skills and medical knowledge to help this rural, underserved community.

Dr. Acosta is interested in continuing his work with underserved populations and in his spare time, he enjoys collecting vintage watches, cooking, gardening, hiking and traveling. 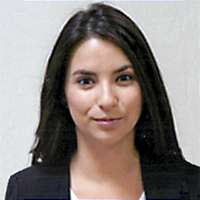 Dr. Silvia Buenrostro was born in Santa Ana, California and raised in Riverside County. In 2008, she received a Bachelor's Degree in Biology from the University of California, Riverside. Returning to her family roots, she completed her medical studies at The Universidad de Ciéncias Médicas in San José, Costa Rica in 2015.

Dr. Buenrostro is committed to Family Medicine and community service. During her free time, she enjoys reading science fiction novels and biographies, running and hiking. 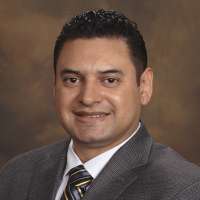 Dr. Fausto J. Castillo was born in Granada, Nicaragua. For three years during his adolescence, he lived Los Angeles and gained exposure to American culture. Later, he and his family returned to Nicaragua where he attended medical school at the Universidad Nacional Autónoma de Nicaragua.

After graduating medical school, he obtained an international Master in Business Administration where his post-graduate studies help earn him the distinction of becoming the first clinical trials monitor in Nicaragua. By the end of 2010, he returned to Los Angeles and worked for the community as a study surveyor, registered medical assistant, and nationally board-certified medical interpreter.

Dr. Castillo is an advocate for educating patients and positively impacting the medically underserved communities. His personal interests include: baseball, chess, family-time and traveling. 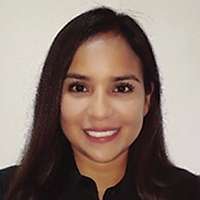 Dr. Karen Yberico-Fourie was born and raised in Lima, Peru. From an early age, she worked alongside her mother, a nurse to provide care to disadvantaged communities. Her desire to help those in need drove her to study medicine at the Universidad de San Martín de Porres.

After graduation in 2009, she had the privilege to complete a Family Medicine residency training program at the Institut Català de la Salut in Barcelona, Spain. During her four years in Spain, Dr. Fourie worked in rural and urban areas providing health care to patients of different age groups and cultures who spoke a variety of languages.

Dr. Yberico-Fourie is committed to high value, community-based patient care for those living in underserved communities in California. When she is not involved with her professional endeavors, she enjoys long-distance running and Yoga. 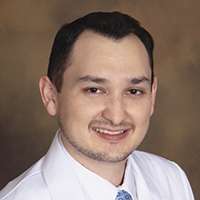 Dr. Gama was born in Mexico City and raised in the border state of Sonora Mexico. As a volunteer with the Mexican Red Cross, he developed an interest and passion for medicine. Motivated by this unique experience, he pursued and obtained his medical degree from the Universidad Autónoma de Guadalajara in 2011. While completing his social service, he had the opportunity to treat and advocate for rural communities in Jalisco, Mexico.

After completing his medical training, Dr. Gama moved to southern California and pursued further medical training in Family Medicine and was accepted into the UCLA International Medical Graduate Program.

In 2017, Dr. Gama will begin residency at the UCLA-affiliated Dignity Health Family Medicine Program in Northridge where he looks forward to advocating and working with underserved and Latino communities. Dr. Gama's professional interests include Global Health, Musculoskeletal/Sports Medicine and Preventive Medicine. He enjoys cycling, hiking, tennis and visiting archeological sites. 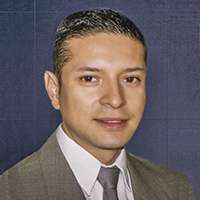 Dr. Garcia was born and raised near the U.S. / Mexican border area and has family living in both countries. Dr. Garcia is the proud grandson of the first chemist in Ensenada, Mexico. Having an early exposure to science, Dr. Garcia graduated from the Universidad Autónoma de Baja California in Tijuana, Mexico in 2011.

After completing medical school and the required year of community social service, he worked as a general practitioner in Mexico which deepened his medical knowledge and sharpened his clinical skills. Dr. Garcia immigrated to the U.S. in order to seek professional growth and to help improve the quality of life for the underserved.

In 2016, Dr. Garcia was accepted into the UCLA International Medical Graduate Program, and he is grateful for the opportunity to begin residency training at the Citrus Valley Health Partners Family Medicine Residency Program. 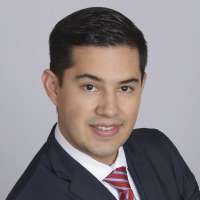 Dr. Javier Gutiérrez-Colín was born and raised in Mexico City. After 16 years of living in the capital, he moved to Leó n in the state of Guanajuato, where he obtained his medical degree from the Universidad de Guanajuato. After graduation, he served in a rural community outside Leó n and provided primary care to the underserved population as part of his social service year. For his distinguished service to the underserved, he obtained recognition from the Governor of Guanajuato.

Prior to moving to the United States, he worked for a year as a general practitioner, providing both inpatient and outpatient care. This opportunity gave him a greater understanding of primary care and inspired him to pursue a residency in Family Medicine. In December 2015, Dr. Gutiérrez-Colín was accepted to the UCLA International Medical Graduate Program where he found the tools and support needed to achieve U.S. licensure.

Dr. Gutiérrez-Colín is interested in the full spectrum of primary care, from prevention to rehabilitation. His personal interests include calligraphy, collecting fountain pens, cooking and playing the guitar. 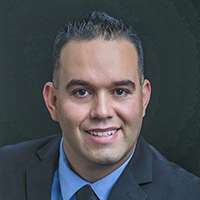 Dr. Francisco Ordaz-Chavez was born in Michoacan, Mexico and was raised in the agriculture area of Oxnard, California where his parents worked hard to provide for a family of six. In 2007, Dr. Ordaz-Chavez graduated from the Universidad Michoacana de San Nicolás de Hidalgo.

After graduation, Dr. Ordaz-Chavez returned to the U.S. and enrolled in a vocational college and also volunteered as a health sciences tutor. In 2010, he worked as a general practitioner in Mexicali, Mexico providing care to the low-income Chicano population.

In 2014, he was accepted as a UCLA scholar of the UCLA International Medical Graduate Program. He is grateful and excited for having the opportunity to fulfill his dream of delivering multicultural health care to underserved populations in California. In June 2017, Dr. Ordaz-Chavez will begin his Family Medicine residency training at the Citrus Valley Health Partners Family Medicine Residency Program.

Dr. Ordaz-Chavez is interested in being a role model to those who live in California's underserved communities and in making a significant contribution to the health and welfare of these communities. When he is not engaged in his professional activities, he spends time playing and watching soccer, plays the trumpet and enjoys fishing off Port Hueneme pier. 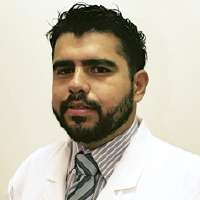 Dr. Jose Rodríguez-Garcia was born in Los Angeles, California, where he completed his elementary school years. When he was thirteen, his family moved to a small town in Zacatecas, Mexico. Having a keen interest in science, he applied to and graduated from the Universidad Autonó ma de Guadalajara School of Medicine where his favorite part of medical school was the social service year. During this service year, he cared for a wide array of patients from those below the poverty line with very low health literacy to those who were college educated professionals. This prepared him to care for patients from all socioeconomic strata.

After graduating medical school in 2014, he returned to the U.S. to pursue a specialty in Family Medicine and was accepted into the UCLA International Medical Graduate Program. During his clinical rotations, he observed the many challenges faced by uninsured and under-insured Spanish-speaking patients and he is committed to helping them and others who face health inequities. Dr. Rodriguez-Garcia will begin residency training at the Riverside University Health System Medical Center Family Medicine Residency Program. 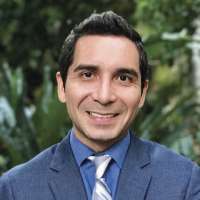 Dr. Felipe Saavedra was born and raised in Santiago, Chile, where he graduated with honors in 2012 from the Universidad de Chile. While attending medical school, he worked and published several research papers as a research assistant with the Arriarán Foundation, a public medical facility for people and families living with HIV. After graduation, he practiced general medicine in diverse public and private settings caring for patients ranging from newborns to adults.

Dr. Saavedra came to the United States in 2015 and joined the UCLA International Medical Graduate Program shortly thereafter. Through volunteering in the community and at UCLA Health hospitals and clinics, he has worked to help others overcome the challenges in accessing quality healthcare, especially immigrant and underserved populations. His participation in the UCLA International Medical Graduate Program have shaped his approach to providing holistic care.

Now an alumnus of the UCLA International Medical Graduate Program, Dr. Saavedra looks forward to joining the UCLA Family Medicine Residency Program. As a bilingual family physician, he is eager to bridge cultural gaps while improving the quality of life for underserved and vulnerable communities in the State of California. 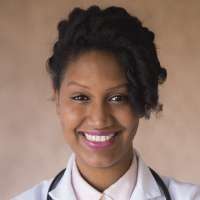 Dr. Gladys Valdez was born in 1989 on the beautiful Island of the Dominican Republic. After graduating as the valedictorian of her high school, Dr. Valdez studied medicine at The Universidad Autónoma de Santo Domingo. During medical school, she volunteered with several departments and later became a teaching assistant to the Department of Pharmacology and Therapeutics. She graduated medical school with honors in October 2012.

After graduation, Dr. Valdez worked as a general practitioner in the underserved city of Gonzalo. At the same time, she continued volunteering at her university and at a maternity hospital in Santo Domingo in her free time.

Dr. Valdez is married to Dr. Fidel Perez, and in November 2014, they decided to move to Mecca, California where she became involved in church and community activities. After offering health awareness conferences to her local community, Dr. Valdez realized the great need for medical professionals in California's underserved communities. In 2016, she proudly joined the UCLA International Medical Graduate Program. She will begin her Family Medicine residency training at UCLA where she will join four other UCLA International Medical Graduate Alumni. Her Professional interests include Community Medicine and Global Health. When she is not engaged in professional activities, she enjoys animals of all kinds, traveling, and meeting new people. 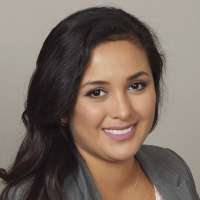 Dr. Estefania Sevilla Way was born and raised in Lima, Peru. She attended medical school at the Universidad Científica del Sur, and after graduating, completed one year of social service in the Amazon Basin. During her social service year, Dr. Sevilla Way worked as a general physician for an air force detachment and with the surrounding native communities. She also volunteered at community health fairs, prevention campaigns for infectious and tropical diseases as well as promoting health in the neighboring communities.

Dr. Sevilla Way cares deeply about increasing access, quality and equity within health care. With this goal in mind and determined to make an impact as a family physician, she joined the UCLA International Medical Graduate Program in October 2013. She will begin her three-year Family Medicine training at the San Joaquin General Hospital Family Medicine Residency Program.

Dr. Sevilla-Way's professional interests include: Community, Preventive and Hospital Medicine. When not engaged in professional activities, she enjoys backpacking, Flamenco dancing, roller derby, snowboarding and spending time with her husband and puppy.