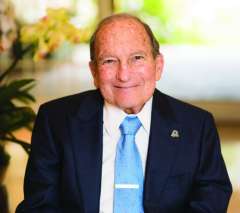 “Gary was the first person I met,” Dr. Roth recalls. “And I was so impressed by him that even though I already had a fellowship arrangement at the University of Pennsylvania, I decided on UCLA.”

That was in 1972. By the time Dr. Roth finished his training, he could still count the number of faculty in what would become the UCLA Vatche & Tamar Manoukian Division of Digestive Diseases on one hand. Today, the division has approximately 80 full-time faculty members and 100 employees, making it among the largest academic gastroenterology divisions in the world. Much of that growth was overseen by Dr. Gitnick, who served as chief of the division from 1993 to 2018. Dr. Gitnick has now retired from administrative responsibilities, but he has a recall appointment and continues to see patients as chief emeritus.

“Gary Gitnick’s leadership over more than two decades helped the Division of Digestive Diseases become the best in the world,” observes Alan Fogelman, MD, chair of the Department of Medicine at the David Geffen School of Medicine at UCLA, of which the division is part. “His work will continue to benefit the lives of many for decades to come.”

After earning his MD at the University of Chicago Pritzker School of Medicine and completing his residency and gastroenterology subspecialty training at the Mayo Clinic, he spent three years as a research associate at the National Institutes of Health. Dr. Gitnick joined the UCLA faculty in 1969. He would become chief of staff at UCLA Medical Center, medical director of the UCLA Health Care Programs and, starting in 1993, chief of a division he would take to unprecedented heights.

During his career, Dr. Gitnick also produced more than 300 publications and authored or edited 64 books on gastroenterology and hepatology. However, one of his greatest passions involved his work outside of UCLA — most notably as founder and chairman of the board of The Fulfillment Fund, a nonprofit organization that provides college-access programs, mentoring, and college scholarships to more than 2,000 students each year from educationally and economically under-resourced communities.

“Helping people in need and creating opportunities for all has always been a priority for Gary,” says Dr. Roth, who served as chief of clinical affairs for the division under Dr. Gitnick’s leadership and is currently also a professor emeritus. “He has done this by creating The Fulfillment Fund to help disadvantaged youth in L.A. and making it the mission of the division to provide exceptional patient care through scientific discoveries and compassion.”

Eric Esrailian, MD, MPH, the division’s current chief, says Dr. Gitnick’s dedication to assisting youth toward reaching their potential has been mirrored at UCLA, where Dr. Gitnick has had a pivotal impact on numerous careers — including Dr. Esrailian’s.“

Dr. Gitnick has played the role of mentor to a whole generation of physicians and scientists at UCLA and across the nation,” Dr. Esrailian says. “He encourages mentees to build on their strengths, but also to challenge and stretch themselves to achieve both personal and professional success. As one of those mentees, I know that his support and guidance have inspired me to always aim for the next level and to strive to achieve maximum impact for my community.”