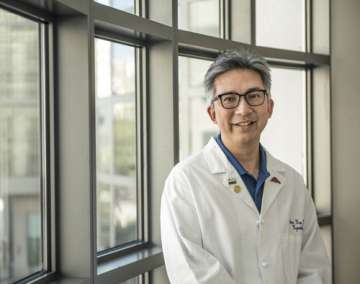 With a five-year, $3.5 million grant from the National Cancer Institute, Steven-Huy Han, MD, director of the Hepatology Clinical Research Center, has joined with colleagues in the UCLA Department of Pathology & Laboratory Medicine on an ambitious effort to develop an effective and affordable blood-based method for the early detection of liver cancer. The so-called “liquid biopsy” would sample for cancer cell-free DNA that could appear in high-risk patients’ blood months or even years before a tumor could be detected by ultrasound — enabling earlier and potentially more successful treatment.

The grant establishes the UCLA Center for the Early Detection of Liver Cancer, part of the national Translational Cancer Consortium to study early detection of hepatocellular carcinoma. The center includes translational and clinical researchers with multidisciplinary expertise in the areas of early detection, biomarkers, cancer surveillance, imaging, and bio-repositories. It is led by Jasmine Zhou, PhD, who developed the technology. Co-principal investigators include Dr. Han, who is collecting serum and following patients clinically; and Samuel French, MD, PhD, a pathologist who is evaluating patients’ tissues.

The study focuses on circulating tumor DNA (ctDNA) in the blood, which carries cancer-specific genetic and epigenetic aberrations. The diagnostic test the center is seeking to validate is based on the DNA methylation patterns of ctDNA, using integrated computational and experimental technologies. “This is a new kind of methylation assay developed by Dr. Zhou that can detect tumor cells in the blood potentially much sooner than we would be able to detect the cancer otherwise,” Dr. Han explains.

For the study, the researchers are focusing on patients at risk for developing liver cancer, including those with cirrhosis who are waiting on a transplant list, as well as at-risk hepatitis B patients. Dr. Han is monitoring these patients through ultra-sound screening and collecting their blood samples every six months, banking it as part of a biospecimen repository that includes plasma from individuals in the cohort as well as tissue from liver tumors after resection, and cirrhotic lesions after liver transplantation. For the patients who go on to develop liver cancer, Dr. Zhou will evaluate their earlier blood samples to determine when tumor cell-free DNA were first detected with the newly developed assay. UCLA and the other centers in the national consortium are sharing their technologies and findings in an effort to jointly arrive at an effective blood test to detect liver cancer at an earlier stage.

“Our current method with patients at risk for developing liver cancer is to do liver ultrasounds at least twice a year, but it’s very hard to pick up a tumor that is smaller than one centimeter from by ultrasound, so it is usually well established by the time we detect it,” Dr. Han says. “We are hoping these new biomarkers will tell us that a cancer has developed months, if not years, before it would even be evident on ultrasound. In addition, a non-invasive blood test in the future would be much less expensive and more accessible, especially in under-resourced populations and under-resourced countries.”