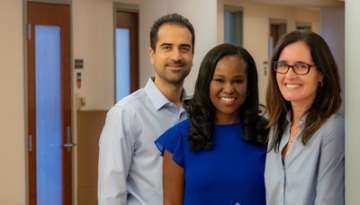 Approximately $3 trillion is spent on healthcare in the United States, and various studies have estimated that between 10 and 30 percent of that spending is on tests, procedures and medications for which, on average, the expected benefits to patients in a particular clinical scenario don’t exceed the potential harm when considering the risk of side effects and complications.

So-called low-value care is a widespread national problem that touches every specialty, notes John N. Mafi, MD, MPH, an assistant professor in the Division of General Internal Medicine and Health Services Research at the David Geffen School of Medicine (DGSOM) at UCLA. Gastroenterology is no exception. “If you order a screening colonoscopy for a 39-year-old patient with no symptoms and no family history of colon cancer, that patient is more likely to be harmed by the procedure than to get any benefit from it,” Dr. Mafi says. “If a patient has one-time, mild stomach gas with no red flags and is prescribed a proton pump inhibitor medication, that patient is also more likely to be harmed than to benefit.”

A number of factors are likely contributing to the problem of low-value care. Among the most commonly cited are incentives to order tests and procedures under the fee-for service payment system, though Dr. Mafi points out that under payment models that provide disincentives to order more services, low-value care is still found. Another likely contributing factor is the fear of being sued for malpractice, along with the mindset among many patients that some care is always better than no care — or the assumption among physicians that their patients want a service to be ordered for whatever concern they are experiencing. “Unfortunately, we have a long way to go before our general American culture embraces the concept that oftentimes in medicine, less is more,” says Catherine Sarkisian, MD, MSPH, a professor and health services researcher in DGSOM’s Division of Geriatrics and the VA Greater Los Angeles Healthcare System’s Geriatrics Research Education Clinical Center and the director of the recently launched UCLA Value-Based Care Research Consortium.

But Dr. Sarkisian adds that reducing low-value care is becoming a national priority — and deservedly so. “Like most of my colleagues, I went into medicine because I wanted to help people, so it has been very distressing to learn that so much of what we actually do for patients has no chance of being helpful — and even worse, is often harmful,” she says. “The recent increased focus on value based care has evolved naturally in response to out-of control healthcare spending combined with front-line clinicians seeing wasteful and harmful care delivered every day. Focusing on value-based healthcare simply means working to make sure that the care we deliver is known to improve meaningful health outcomes.”

As they aim to tackle the issue of low-value care and improve quality through research, Drs. Mafi and Sarkisian have found a partner in the UCLA Vatche and Tamar Manoukian Division of Digestive Diseases, under the leadership of division co-chief Eric Esrailian, MD, MPH. “Dr. Esrailian has been very enthusiastic and forward thinking about the issue of improving value at UCLA,” Dr. Mafi says. With financial support from the division, as well as from the UCLA Clinical and Translational Science Institute, the Robert Wood Johnson Foundation, and the MacColl Institute, Drs. Mafi, Sarkisian and Folasade P. May, MD, PhD, MPhil, an assistant professor and health services researcher in the division, have embarked on a series of studies to measure and then engage clinicians in reducing low-value care for certain GI services at UCLA, with studies involving other clinical units at UCLA to follow. “Value in healthcare is something that both hospitals and patients care about,” says Dr. May, who directs the division’s quality improvement program. “In recent years we have seen the introduction of many medical technologies and therapies, but the issue of what constitutes appropriate use of these services has been understudied.” The researchers started by looking at inappropriate overuse of colonoscopy as a colorectal cancer screening tool. Although the underuse of colonoscopy screening for patients who meet evidence-based national guidelines is a serious concern, a study within the VA  system found that there is also a significant amount of low-value care related to colorectal cancer screening. “Colonoscopy can remove cancers and save people’s lives, but there is a small risk of complications,” Dr. May says. “That means if we are performing 1,000 unnecessary colonoscopies, we’re going to have one, two or three patients with negative outcomes from the inappropriate use of that test.”

Drs. Mafi, Sarkisian and May developed and tested a reliable algorithm for determining low-value colorectal cancer screening. “Given that UCLA, like many health systems, is fee for service, we expected to find a significant amount of low-value care for colonoscopy cancer screening, yet the rates were very low, which is great,” says Dr. Mafi, who adds that the finding will be published so that other systems can build on the measurement tool to identify any problem they might have.

The research team is also evaluating the extent to which upper endoscopy is used for low-value care of patients with uncomplicated heartburn or dyspepsia. “Acid reflux is one of the most common GI conditions, and we have specific research-based guidelines that we can follow in defining overuse,” Dr. May says. A third project is studying the use of proton pump inhibitors — medications that have been widely prescribed for upper-GI symptoms, but have been linked in some studies to negative outcomes such as kidney damage and increased dementia risk. If the UCLA team finds high rates of overuse of these drugs, it will design an intervention aiming to influence UCLA Health physicians to prescribe them in a more evidence-based way, Dr. Mafi says. Beyond sharing the results of their research across the UCLA Health system in an attempt to educate and engage frontline clinicians in the effort to reduce low-value care, the UCLA researchers hope that by publishing their findings they will help to catalyze a broader national movement. “There is a lot of interest in this work, and physicians recognize its importance,” Dr. May says. “In many cases we now have enough data to say when a service is appropriate and when it is not, and no one wants to perform an inappropriate service. Our first oath as physicians is to do no harm.”