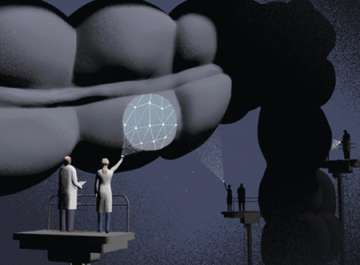 The ability to modulate the electrical signals transmitted by peripheral nerves — the sympathetic and parasympathetic nerves that connect the brain to the rest of the body, controlling the function of each organ — could provide the key to a powerful new class of treatments for many intractable diseases and conditions, including GI disorders. The UCLA Vatche and Tamar Manoukian Division of Digestive Diseases is currently part of an unprecedented international effort to do just that.

A National Institutes of Health (NIH)-funded consortium headed by Yvette Taché, PhD, distinguished professor in the division, has completed the first year of a three-year, $7.5 million OT2 grant whose objective is to provide the first comprehensive and detailed structural and functional mapping of the nervous system of the colon in humans and the pig — a large animal model with structural and physiological similarities to humans. The grant is part of NIH’s Stimulating Peripheral Activity to Relieve Conditions (SPARC) program, which is expected to provide approximately $238 million in funding over a five-year period in an effort to map the body’s electrical wiring and develop devices that will allow for the therapeutic stimulation of those nerves.

More than two-dozen multidisciplinary teams are being funded through SPARC, including groups studying other organs such as the heart, lung and spleen, to gain new insights into how peripheral nerves control internal organ function through local circuitries. Such an understanding could ultimately lead to advances in neuromodulation that would allow for more precise treatment of diseases and conditions for which conventional therapies are inadequate.

Dr. Taché points out that the colon is involved in a multitude of disorders — including chronic constipation, diarrhea, diverticulitis, irritable bowel syndrome, inflammatory bowel diseases, Clostridium difficile, colitis, cancer, Parkinson’sassociated dysmotility, and age-related pelvic dysfunction — that are leading causes of morbidity and mortality, at an annual cost to the U.S. healthcare system of an estimated $21 billion.

“As we have learned more about the significance of the nervous system in regulating colonic function — the brain-gut connection — and its importance in issues relating to motility and inflammation, researchers have focused on understanding the neurochemical and electrophysiological properties, cell physiology, and functional roles of colonic enteric neurons and their interaction with the parasympathetic, sympathetic and sensory systems,” Dr. Taché explains. “But until recently, we have been able to obtain this data only through small-animal studies. Now, cutting-edge approaches such as 3-D mapping, innovative viral tracing tools, and neuroimaging make it possible to obtain detailed information on neural circuits and related functions in large animals and human tissues, which is what we need as a foundation for neuromodulation therapies.”

To undertake the complex task, Dr. Taché has assembled a multidisciplinary team of top investigators that includes individuals who have developed state-of-the-art neuroanatomical, molecular, electrophysiological and functional approaches, as well as those who are expert in the state-of-the-art methodologies and on the stimulation of nerves in the colon in humans. The team includes researchers both from UCLA — where four departments are represented — and from seven outside universities, including institutions as far away as Germany and Australia. In addition to the collaborations within the consortium, Dr. Taché’s group meets regularly with other SPARC consortium groups to exchange ideas and share data.

Dr. Taché’s group has benefited greatly from the groundwork established by a UCLA-led SPARC consortium that is mapping the heart’s nervous system. In many ways, that $8.6 million grant, awarded in 2016 to Kalyanam Shivkumar, MD, PhD, helped to establish a template that for Dr. Taché’s team as it lays the foundation for new ways to treat cardiovascular disease by modulating electrical signals in the heart’s autonomic nervous system. “Understanding the nervous system’s control of the heart is such a complex problem that it requires a collaborative approach, and we’re pleased that so many experts are coming together for this initiative,” says Dr. Shivkumar, the SPARC cardiovascular consortium’s lead investigator and director of the UCLA Cardiac Arrhythmia Center and Electrophysiology Programs. “Our goal is to precisely map the heart’s anatomy and code the function of the nerves that control the heart from a very basic level all the way to clinical studies in humans.”

Dr. Taché’s SPARC team is using the same sophisticated technological and imaging approaches to map the nerves and functional circuitries in the colon, setting the foundation for the project’s second phase, in which researchers will run therapeutic assays under pathophysiological conditions in an effort to develop electroceutical interventions to treat colonic disorders.

“We aim to understand how the colon responds to direct and indirect electrical stimulation,” explains James Dunn, MD, a principal investigator on the team and a member of the Department of Surgery at Stanford University. “This will lead to the development of devices that can modulate colon function in a variety of diseases such as inflammatory bowel disease and motility disorders.”

“Modern pharmaceutical-based treatments are not always precise or targeted,” adds Wentai Liu, PhD, a distinguished professor in the UCLA Department of Bioengineering and member of Dr. Taché’s SPARC team. “Electrophysiological intervention provides a promising alternative strategy to exert direct control of the autonomic nerves that regulate selected organs of interest. The implementation of this strategy has been slowed due to limited understanding of autonomic nervous system function and control. SPARC is fostering the science and engineering collaborations that will facilitate the understanding of the fundamental science of, as well as the manipulation of, autonomic networks. As an engineering researcher, I’m very pleased to be part of this challenging and exciting initiative.”

Learn more about the Taché Laboratory >