We are deeply saddened to report that W. Eugene Stern, M.D., founding chief of neurosurgery and former chair of surgery at UCLA, died on July 27, 2017 in Truckee, California.  Dr. Stern was 97 years of age. 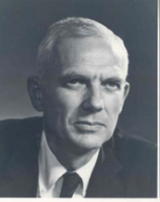 A native of Portland, Oregon, Dr. Stern received both Bachelor of Arts and Doctor of Medicine degrees from the University of California. From 1946-48, he served in the Medical Army Corps of the United States, rising to the rank of Captain.  Dr. Stern was a clinical clerk in the National Hospital for Paralyzed and Epileptic in London (1948-9) and national research fellow in medical science at Johns Hopkins (1949-50).  He completed training in neurological surgery under Dr. Howard C. Naffziger at the University of California in 1951.

Dr. Stern joined the UCLA faculty in 1952 as the chief of the division of neurosurgery in the new department of surgery under Dr. William P. Longmire, Jr. and held this position until 1985.  During these years he established neurosurgical affiliations with the Wadsworth (now Greater Los Angeles) Veterans Administration Medical Center and with Harbor General Hospital (now Harbor-UCLA Medical Center), and he brought the neurosurgery faculty and residency program to the positions of national prominence that they enjoy today.  Dr. Stern led the department of surgery as chair from 1981 to 1987, which also marked the year of his retirement and transition to emeritus status.

A clinician, educator, and scientist, Dr. Stern had particular interests in intracranial mass dynamics, cerebral edema, C.N.S. infectious processes, cranial tumors, and postoperative care of the neurosurgical patient.  He was a meticulous teacher who held himself to the same rigorous standards that he expected of his students.

Dr. Stern was married to his wife, the former Elizabeth Naffziger, from 1946 until her untimely death in 1989.  He is survived by their four children, Eugenia Louise, Geoffrey Alexander, Howard Christian, and Walter Eugene.

Dr. Stern was a key figure in our School. He also was a great gentleman, a dedicated teacher, a fine clinician, and a lifelong scholar.  Appropriately reflecting his legacy, the chair of neurosurgery at UCLA holds the W. Eugene Stern Endowed Chair.

A memorial service is planned for the afternoon of Saturday, August 19 at St. Matthew’s Episcopal Church in Pacific Palisades, and we will send details as soon as they are available.  We extend our heartfelt condolences to all of the Stern family for their great loss.