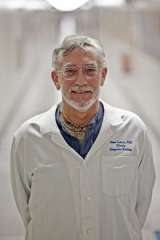 Dr. Robert Trelease is a hacker.  He's a techno-wizard.  He's an entrepreneur.  He's the self-described (tongue-in-cheek) "Al Gore of educational computing" in the David Geffen School of Medicine at UCLA.  He is also a professor in the Department's Division of Integrative Anatomy.

Seeing him, tucked in an office that is difficult to find in the hidden corridors of the Center for the Health Sciences, you may not immediately place him in this role. But when he talks the lights come on and you find yourself trying to keep with his words with little success, as his ideas fly quickly past you.

Before Microsoft Windows and PowerPoint, Dr. Trelease was already using computers to give lectures in anatomy.  However, the process of preparing and presenting a presentation was much different than we know it today.  In the early days of computing, anatomical images had to be painstakingly scanned with a custom-interfaced camera, one by one.  The slides were then programmed with an early video presentation scripting language, which only few managed to master.  Finally, a specially interfaced Amiga computer and surplus video projector were dragged into the lecture hall or lab to give students visual checkpoints during lectures.  In all, it could take up to 80 hours to prepare a single presentation.

When Luann Wilkerson was hired as Senior Associate Dean for Medical Education for the School of Medicine, she quickly became aware of Dr. Trelease's computer ambitions.  They began an ongoing, 15-year dialogue on how computers could be used to improve medical education.  By the mid-1990s, the Dean's Office was preparing to support the first generation of PowerPoint-based computer lectures and digital projection in its renovated lecture halls .

"The next milestone in computer-assisted anatomy education was the eruption of computer-accessible Internet," explained Dr. Trelease.  "Everything changed, from the economy to commerce, and it quickly became evident that computers would be very viable educational tools."  To capitalize on these events, the School of Medicine formed the Instructional Design and Technology Unit (IDTU) in 1996, with Dr. Trelease serving as faculty advisor, and later as webmaster and continuing Associate Director.   IDTU was designed to be a focal point for technology assistance, focusing primarily on learning and teaching.  For the past 15 years, the site's team has created education tools, managed online resources (e.g., ANGEL course management [CMS] and podcasting), and studied the effectiveness of technology on the overall learning process of medical students.  The goal has always been to improve student and faculty communication, enhance classroom and lab instructional methods, explore alternative learning delivery methods, and provide faculty, staff and students access to important electronic learning resources.  At the time IDTU was founded, the UCLA School of Medicine was one of the first in the U.S. to adopt a medical student Computer Ownership Requirement, which ultimately allowed the resources provided by the IDTU to be accessible by all medical students.

To ensure that medical students took full advantage of available technology, Dean Wilkerson and the Dean's Office wanted each student to have a personal digital assistant (PDA).  Dr. Trelease was responsible for identifying crucial server technology and prototyped applications that would allow IDTU to leverage its web resources for these PDAs.  The PDA requirement was implemented in 2001 for 3rd and 4th year student clerkships.  Their PDAs were loaded with a variety of information from the Dean's Office (such as how to navigate at off-site rotations like Cedars-Sinai, what to do in case of an accidental needle stick, etc.), as well as a pharmacopeia reference with drug dosing information, medical terminology, and clinical decision-support software. Dr. Trelease published several papers about the successes of the PDA as used by medical students at UCLA.  The technology was later adopted by other academic institutions, including national leaders like Harvard, Stanford, and Yale.

The PDAs also proved important for the School's periodic evaluations by accrediting groups such as LCMA and AAMC.  Accrediting groups request data on the demographics and illnesses of patients encountered during clerkship rotations, data that was often difficult to provide in the past.  However, while on their clerkships UCLA medical students entered these data into their PDAs, which then could easily be downloaded onto the school's servers and processed by the IDTU staff.  This was such a novel practice that the UCLA School of Medicine received an award from the AAMC for innovative use of technology in gathering and storing information.  The trophy now hangs on a wall on the 4th floor of the Biomedical Library.

Technology continued to evolve quickly as the Internet matured into the new millennium and smartphones started to spread to the broad populace.  PDAs became less useful as students began self-selecting the iPhone for many tasks in their daily lives.  "In this case, the school's technology requirement adapted to our student's behavior," explained Dr. Trelease.  "We adopted a general smartphone requirement by 2009."

The next generation of advances brought the iPad, which has become an ideal mobile platform for viewing medical records and files with detailed graphics.  With this big-screen, high-resolution, high-capacity device, Dr. Trelease saw the ideal format for anatomy education. Working with Elsevier publishers, he began incorporating images by the renowned anatomical artist Dr. Frank Netter into a "just-in-time" mobile learning resource for medical student surgical clerkships and for general surgery residents.

"Many educators think anatomy should be taught across all four years of medical school," continued Dr. Trelease.  "It's difficult to do that when third and fourth year students are running from clinic to clinic.  They can't carry a textbook into the operating room while they observe gall bladdery surgery, but they can easily refer to their iPhone or iPad or small reference guide while the surgeon is explaining crucial surgical anatomy, blood supply, etc."

Elsevier, starting with a conservative approach, published Dr. Trelease's book, Netter's Surgical Anatomy Review P.R.N., in 2010, as a portable volume that could be carried in a lab coat pocket. "I also pitched the project as an iPhone application that could be downloaded," he added.  To make this happen he had to learn iPhone programming.  "This was something like translating Mandarin into Russian and then writing the message in German.  The language has words that are a foot long.  It got so I had so much language and so much anatomy in my head that I sometimes found it difficult to converse at a normal level."  The print version was released in summer of 2010.

Dr. Trelease had registered as Apple developer in 2008, and, despite his teaching load, completed the iPhone version of the book during the 2010 fall term.  This was the first iPhone application that Elsevier brought to market through its internal "epublications" group.

Still peering around the corner for the next technological advent, Dr. Trelease anticipated Android as the next hot thing.  He learned to program it over Christmas break, 2010.  The Android market version of his book was released in May 2011.  "When the Nook color Android version was released by Barnes & Noble in August of 2011, I registered to become a developer for them as well," said Dr. Trelease.  "I love being on the leading edge of technology as the wave breaks."   A Kindle eBook version was released in late fall of 2011.

Having tablet computers gave Dr. Trelease an entirely new platform for his book.  "Even though it was not created for iPad, it was proof-tested on it and runs well in that format," he explained.  The iPad can accommodate medical imaging modalities that enable visual data to be sent to or received by other centers for comment. "The iPad is clearly the mobile device of the present in the clinical environment," he said.  "Even electronic medical record (EMR) access and medical imaging are now viable.  The iPad can even access medical libraries or clinical databases remotely."  All of which offer huge opportunities for medical education and clinical care.

Portable technology continues to be used by interns and residents as part of their medical training.  "They can now bring information to the point of contact - in the hospital," Dr. Trelease explained.  "They have the electronic resources to check dosing information, typical symptomatology, and many more clinical facts that need to be right, all at the click of a button.  With the iPad, they can have more information at their fingertips than anyone could ever memorize."

Beyond medical education, Dr. Trelease sees great promise in extending current services in telepathology and automated gene-based tissue analyses to mobile devices, such as the iPads that will be functional with UCLA Health System's new CareConnect EMR system, as well as to those of outreach clients.

"I've been historically part of a cost center in the School of Medicine," remarked Dr. Trelease.  "But I'm now making money on my books and applications, and effectively on my software development services.  The IDTU offers its clients help with course support, application development, multimedia production, and educational tool design services.  All this helps to offset our educational costs and overhead."  He continues, "The University is pushing us to be more entrepreneurial, and this has always been natural for me.  I'm willing to share my expertise, which is why I helped build IDTU and all its learning resources over the last two decades.  I've given countless presentations and written papers to inform our colleagues at other institutions about what I see coming and how it can be used to improve medical education."