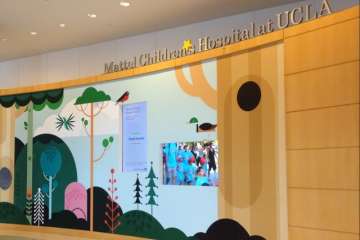 Ronald Reagan UCLA Medical Center is one of the premier medical centers in the country. The facility was designed by world renowned architect I.M. Pei (designer of the Louvre Art Museum in Paris). Ronald Reagan UCLA Medical Center was recently ranked by U.S. News & World Report as the sixth best hospital in the nation and best in the Western United States. UCLA Mattel Children's Hospital is one of the highest-rated children's hospitals in Southern California and is an integral component of the UCLA Ronald Reagan Medical Center, which is situated on the main UCLA school campus. The UCLA campus is situated in Westwood, which is 8 miles from the Pacific Ocean. Westwood is unique in that it is predominantly a college village along with neighborhoods that offer independent housing.

UCLA Santa Monica Medical Center is a newly rebuilt campus of the UCLA Health. The new campus also includes a branch of UCLA Mattel Children's Hospital. The hospital is situated 10 minutes from the UCLA main campus and 5 minutes from the Pacific Ocean. There is a UCLA van service that shuttles between the two hospitals.

Our fellows also spend time at Miller Children's & Women's Hospital in Long Beach where we provide inpatient and outpatient services.