This year more than 300,000 new cancers of the gastrointestinal tract will be diagnosed, making the digestive system the most common cancer site. Pancreatic cancer has surpassed breast cancer as the third-leading cause of cancer death in the United States; colorectal cancer is second. Approximately 160,000 people will die from GI cancers. “This is one of the most challenging problems facing gastroenterologists,” says Dr. Enrique Rozengurt, the Ronald S. Hirshberg Chair in Translational Pancreatic Cancer Research in the UCLA Vatche and Tamar Manoukian Division of Digestive Diseases. “There is an intense need for basic and clinical research to better understand the process and become more successful at prevention and therapy.”

Cancer research within the division runs the gamut from basic and translational to clinical studies. The two major areas of focus, pancreatic and colorectal cancer, call for fundamentally different approaches. Because pancreatic cancer is typically not found until it has progressed, and treatment has been relatively ineffective, the focus is on basic science to learn more about the mechanisms involved. For colorectal cancer, effective screening tools allow for early diagnosis and curative treatment, but given that a significant portion of the population isn’t taking advantage of them, much of the focus is on improving screening rates.

Dr. Rozengurt, a pioneer in the area of signal transduction and cell growth regulation, serves as the director of CURE: Digestive Diseases Research Center, a National Institutes of Health (NIH)-funded center that has consistently promoted studies on pancreatic inflammation and cancer. Epidemiological studies in recent years have linked obesity and longstanding type 2 diabetes with increased risk for developing clinically aggressive pancreatic cancer. In a series of studies that have opened up a new field of pancreatic cancer research, Dr. Rozengurt’s group has shown that metformin, the most widely prescribed drug for the treatment of type 2 diabetes, inhibits pancreatic cancer growth in preclinical scientific models, and the proliferation of human pancreatic cancer cells in culture. The team has advanced these studies by using imaging of single human pancreatic cells and experiments in preclinical models of pancreatic cancers. “Because metformin is an FDA-approved drug widely used in the treatment of type 2 diabetes and other conditions, including pre-diabetic states, rapid translational research is a tangible possibility,” Dr. Rozengurt says.

Dr. Rozengurt’s group is also focusing on other pancreatic cancer pathways, including a pursuit of the hypothesis that the pro-oncogenic protein YAP could play a critical role in promoting pancreatic cancer and in mediating crosstalk signaling. Using high-throughput screens of compounds capable of altering the subcellular localization of YAP, Dr. Rozengurt identified statins as potential YAP inhibitors. He and his colleagues have found that the statins potently block YAP-regulated genes in pancreatic cancer cells, and that various statins inhibit the multiplication of pancreatic ductal adenocarcinoma cells — as well as acting synergistically with metformin. 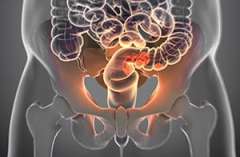 In colorectal cancer, the U.S. Centers for Disease Control and Prevention estimates that one-third of adults ages 50-75 are not screened. Dr. Folasade P. May, an assistant professor in the division, is helping to spearhead multiple efforts to increase screening — within the UCLA Health system, with the U.S. Department of Veterans Affairs (VA), and in a low-income, under-resourced community in Los Angeles.

As part of the National Colorectal Cancer Roundtable (NCCR) initiative “80% by 2018,” more than 1,000 organizations have committed to substantially reducing colorectal cancer as a major public health problem by working toward the shared goal of 80 percent of adults 50 and older being regularly screened by next year — an increase of 2 million people over current levels. “Even at an advanced center like UCLA, the rates are in the mid-60s,” Dr. May notes. Through the Department of Medicine and UCLA Health Quality Initiative team, Dr. May has worked with call centers to contact patients who haven’t been screened, explain the benefits, and encourage them to make appointments to schedule screening. These patients are also being offered home-based screening tests as an alternative to colonoscopy. In addition, Dr. May has helped to develop UCLA Health’s outreach to providers and patients, including presentations and professional-level videos on screening’s value.

The VA has high colorectal cancer screening rates — recently recognized by the NCCR for achieving an 82 percent rate. But among the 8-10 percent of patients whose fecal immunochemical test (FIT) is positive, only about 50-60 percent obtain a colonoscopy within a year. Working with a team both at the VA Greater Los Angeles Healthcare System and nationally, Dr. May is investigating the causes of the poor follow-up and what can be done to move FIT-positive patients to colonoscopy screening more rapidly.

Dr. May also has a seed grant from the UCLA Jonsson Comprehensive Cancer Center to develop a partnership with T.H.E. (To Help Everyone) Health and Wellness Center to improve colorectal cancer screening. The T.H.E. clinic in Watts, which primarily cares for African-American and Latino patients, has screening rates of approximately 30 percent. Through patient and provider outreach, Dr. May and colleagues hope to improve access to care and screening rates. “Community health centers have the lowest screening rates in the nation,” Dr. May says. “With very small interventions, we believe we can make a big impact.”

The vast differences in the approaches of Drs. Rozengurt and May — from basic science in the laboratory to outreach in the community — are characteristic of the breadth of the division’s cancer research effort as a whole. For example, Dr. V. Raman Muthusamy, director of interventional endoscopy for the division, has been a leader in clinical studies to treat Barrett’s esophagus, both to prevent the development of esophageal cancer and to treat early cancers and avoid the need for surgery. “What’s so powerful about the cancer research in our division is that we have researchers who cover the entire spectrum of the disease, from the first cells that are predisposed to cancer all the way to treatment,” Dr. May says. “It’s very valuable to work in a division where we are covering that complete cancer care continuum.”