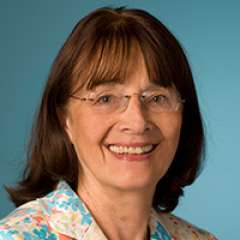 Dr. Taché is a recognized leading expert in brain-gut interactions and the role of peptides in the underlying mechanisms of stress-related gut dysfunction and central vagal regulation of gut function. She and her research team reported some of the pioneer work on the central actions of peptides to influence digestive function and feeding behavior. Her laboratory provided the preclinical ground work showing potential benefit of blocking corticotropin releasing signaling pathways in experimental models of irritable bowel syndrome and postoperative ileus. Building on her initial work on the peptidergic regulation of vagal activity to the gut, she is investigating with Dr. P-Q Yuan their role in the modulation of the cholinergic anti-inflammatory reflex in the context of post-operative ileus. In collaboration with Dr. Lixin Wang, they demonstrated the role of ghrelin agonists to alleviate gut motor dysfunction in models of Parkinson Disease. She is directing a consortium NIH SPARC grant on the structural and functional mapping of mammalian colonic nervous system.

Dr. Taché joined the Digestive Disease Division in 1982 and was appointed professor-in-residence in 1987 and distinguished professor since 2009. Professor Taché developed this field of research through continued competitive grants obtained from the National Institute of Health (NIH) since 1982 as well as Veteran Administration (VA) Merit Award since 2000. She was director of the Animal Core within the NIHDDK Digestive Diseases Center up to 2020 and a co-director of the UCLA G. Oppenheimer Center for Neurobiology of Stress and Resilience (CNSR). She published 390 peer-reviewed articles, 180 reviews, 22 editorials and edited 15  books. Professor Taché has been the recipients of NIHDDK MERIT Award, the Distinguished Research Award in Gastrointestinal Physiology from the American Physiological Society, the Janssen Award for Basic Research in Gastrointestinal Motility, the Senior Investigator–Basic Science Award from the International Foundation for Functional Gastrointestinal Disorders, the Research Scientist Award from the Functional Brain-Gut Research Group, the Outstanding American Gastroenterology Association (AGA) Women in Sciences, the Research Mentor Award from the AGA Institute Council,  Distinguished Scientist Award for Women in Neurogastroenterology  from the American Neurogastroenterology & Motility Society,  and the Senior Research Career Scientist Award and Middleton Award from the Veteran Administration and the Legion of Honor from the French Government. She served on NIH and VA grant application review panels and editorial boards of many peptides, integrative physiology, gastroenterology and stress-related journals and  was an associated editor of Plos One. 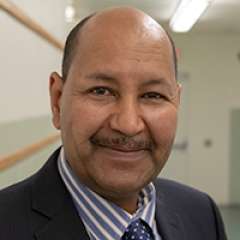 Dr. Mulugeta currently leads two NIH supported research projects on the gut-brain-gut connection through the study of functional and structural circuitry of the autonomic nervous system to pelvic organs (colon and bladder) in health and disease states. These works involve multi-center experts and international teams and are supported by two NIH grants. Dr. Mulugeta is also a University PI on a National Science Foundation supported research to develop novel devices (smart pill) to assess gut secretomotor functions in health and diseases, through SBIR industry-university partnership. In addition, he studies the specific role of CRF2 receptors (CRF2R) in stress-related alteration of colonic function and visceral pain. The project tests the hypothesis that CRFR2 activation modulates stress-related neuroenteric physiology, gut motor function alterations and stress-related visceral pain of colonic origin while CRFR1.

Dr. Mulugeta has published several papers on the brain-gut interaction and stress related gastrointestinal motility, pain and inflammatory responses. He is a reviewer for numerous medical journals and serves as editorial board member for the American Journal of Physiology. Dr. Mulugeta serves as a member to several special emphasis panel of NIH to review grant applications. He is recipient of several awards including the 2011 International Foundation for Functional Gastrointestinal Disorders award in basic sciences. 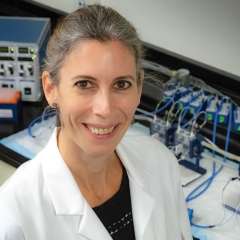 Dr. Larauche completed her PhD in cellular, molecular and integrated physiopathology in 2003 at the University of Paul Sabatier (Toulouse, France). Then, she moved to Los Angeles as a postdoctoral fellow with Dr. Emeran A. Mayer (2003-2005) and subsequently Dr. Yvette Taché (2005-2009). Dr. Larauche is currently associate professor of medicine in the Vatche and Tamar Manoukian Division of Digestive Diseases, in the David Geffen School of Medicine at UCLA.

Dr. Larauche’s primary research focus is to elucidate the mechanisms by which stress influences the brain-gut axis and visceral pain differentially in males and females, with a special emphasis on recruitment of peripheral pathways (enteric nervous system, epithelial permeability, gut neuroimmune system) as a crucial step toward understanding irritable bowel syndrome (IBS) pathophysiology and improving health care. Her central hypothesis is that the higher susceptibility of females to visceral pain and constipation is related to sex-specific alterations of the immune (mast cells) and epithelial (ion channels and secretion, tight junctions and permeability) systems related to sex hormones. In collaboration with Dr. Lin Chang, she has been able to move her preclinical research activities toward translational approaches using biological samples from IBS patients recruited from the community. Her research activities also involve the development of new rodent models of visceral pain and stress. With her colleagues, Drs. David Adelson, Guillaume Gourcerol and Million Mulugeta, she developed a novel technique to monitor visceral sensitivity in mice and rats non-invasively. With these tools and approaches, she was able to demonstrate for the first time the development of stress-induced visceral analgesia in rodents, which is affected by the technique used for visceral pain monitoring and by a previous exposure to early life stress. More recently, she expanded her research focus to the functional mapping of the autonomic neural circuits to the gut and the pain circuitries of the colon and bladder in porcine models.

Dr. Larauche has been the recipient of the 2013 Award for Junior Investigator in Basic Science from the International Foundation for Functional Gut Diseases (IFFGD) as well as NIH NIDDK T32, K01 and SBIR awards. She’s currently project leader on a NIH U01 grant led by Dr. Mulugeta. Dr. Larauche’s works include more than 33 original research articles, eight review articles, and four book chapters. She also serves as editorial board member of Neurogastroenterology and Motility, Frontiers in Neuroscience (Autonomic Neurosciences), Frontiers in Pharmacology (Gastrointestinal and Hepatic Pharmacology), Frontiers in Physiology (Autonomic Neuroscience) and Frontiers in Pain Research (Abdominal and Pelvic Pain). 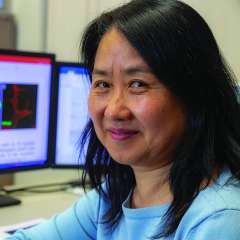 Dr. Wang graduated from Peking University Medical School in China, receiving her MS in 1984 and PhD and 1987, as well as teaching human anatomy and neuroanatomy there from 1979 to 1992. She was a visiting scholar in the Department of Histology at Karolinska Institute in Stockholm, Sweden from 1989-1990 and 1992-1993. Dr. Wang joined the UCLA CURE:Digestive Disease Research Center in 1993. Currently, she is a researcher in the Brain-Gut Interaction Laboratory led by Dr. Yvette Taché at CURE and UCLA, a research scientist at West Los Angeles VA Medical Center, and principal investigator on a VA rehabilitation grant to assess the beneficial effect of ghrelin agonists in Parkinson’s disease models.

Dr. Wang’s expertise is in neuroanatomy and animal models of brain-gut interaction. Her current research projects focus on treatments of digestive and related dysfunctions of Parkinson’s disease in animal models, and on neuronal tracing of motor and sensory innervation of the colon. She has extensive experience in mapping of brain circuitry involved in brain-gut interactions in animal models of stress, and in neuropeptide- and hormone-regulated feeding and gut motility. Dr. Wang also conducted research on the innervation of epidermis of human skin and hair regrowth induced by a stress hormone antagonist in a mouse chronic stress model. She has co-authored 110 peer-reviewed articles. 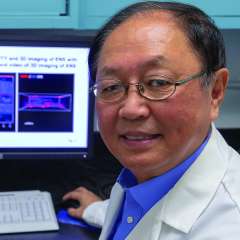 Dr. Yuan received his PhD in neuroendocrinology in 1993 from Peking University Health Science Center in China. After serving as a lecturer and associate professor in the Department of Histology and Embryology at Peking University Health Science Center for two years, he went to Uppsala University in Sweden as a visiting scientist in the Neurobiology Laboratory, Department of Psychiatry (1995-1996) and subsequently moved to UCLA, where he has been since that time. Currently, Dr. Yuan is a researcher in the Vatche and Tamar Manoukian Division of Digestive Diseases at the David Geffen School of Medicine at UCLA.

Dr. Yuan has been working in the field of brain-gut interactions, and particularly focusing on the roles of CRF and its three new related peptides, urocortin (Ucn) 1, Ucn2 and Ucn3, in mediating gastrointestinal motor alterations centrally and peripherally, and on the anti-inflammatory effects of brain-vagal stimulation and ghrelin agonist HM01 on the rat postoperative ileus. On the brain-gut interaction team led by Dr. Yvette Taché, he found that CRF is expressed at the gene and protein levels in the rat colon and upregulated by endotoxin. He identified three novel CRF type 1-receptor variants in the rat pituitary, pons and medulla. Dr. Yuan’s work also provided molecular/anatomical support for an important role for CRF/CRF1 coupling in the colon as part of the local effector limb of the CRF1 receptor-mediated colonic motor response to stress. Further, his work established a distribution pattern of CRF2b receptor expression on all three Ucn ligands in the rat gastric and colonic myenteric neurons and their roles in the modulation of the motility and inflammation. He obtained evidence in the rat that abdominal surgery induced a pro-inflammatory M1 macrophage response in the gastric muscular layer that is prevented by central vagal cholinergic activation induced by central TRH or ghrelin agonist HM01. More recently, in collaboration with national and international researchers, Dr. Yuan has been involved in the NIH/SPARC-funded consortium study on comprehensive neuroanatomical and functional mapping of colonic innervation (PI/PD: Dr. Yvette Taché). As a co-investigator, he is in charge of the ENS 3D structure/phenotype and molecular profiling in the mouse, pig and human colon. He developed a CLARITY protocol applicable for 3D imaging/phenotyping of the mouse and pig colon and revealed the ENS 3D structure, connectivity among the enteric plexuses, as well as a rich innervation of the mucosa primarily from inner submucosa plexus and distinct patterns of intrinsic cholinergic innervation. Dr Yuan’s works publications include more than 40 original research articles, three review articles, and four book chapters. 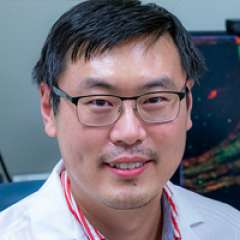 Dr. Li received his PhD degree in ecology in 2013 and continued his research as a postdoctoral fellow (2013-2016) at the Research Center for Eco-Environmental Sciences, Chinese Academy of Sciences. He was a visiting scholar (2013-2014) in the Institute of Biology at Freia Universität Berlin, Germany. Then, he moved to Los Angeles and since 2018, he is a postdoctoral fellow in Dr. Yvette Taché lab. Dr. Li is involved in the current research projects in the context of colonic innervation working closely with Dr. Yuan. His expertise in RNA sequencing, application of statistical and computational methods, 3D imaging using confocal laser scanning microscopy and 3D image processing and computational quantification using Imaris and Neurolucida 360 has helped to extend current knowledge in the field of neurogastroenterology.  He is co-author of an article published in Neurogastroenterology and Motility on the colonic cholinergic innervation of the human colon. 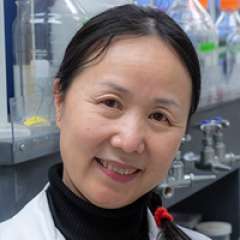 Honghui received her BA from Hubei Medical College in China in 1987, and then served as a registered nurse and head of nurse from 1988-1998 in the Second Clinical Hospital, Hubei Medical University, Wuhan, China. She jointed Dr. Tache’s lab in 2002 where she is currently a laboratory technician with multiple skills acquired throughout the years to perform in vitro and in vivo experiments. She has been involved in several NIH and VA funded projects, and the most recently worked on NIH-funded SPARC OT2 project. Her outstanding technical performance contributed to the success of lab experiments leading to her acknowledgement in more than 80 publications.