We have earned the Magnet Designation for Nursing Excellence since 2005. With a nursing staff of over 130 people, we are committed to providing excellent patient-centered care with teamwork and compassion. As of February 2018, 90% of our staff have BSN or higher degrees in nursing, surpassing the Institute of Medicine (IOM)’s goal of 80% of BSN-prepared nurses by 2020. (source: rn.com - AMN Healthcare Education Services).

AACN President Amanda Bettencourt PhD, APRN, CCRN-K, ACCNS-P, applauds the commitment of the caregivers at unit name at Hospital name for working together to meet and exceed the high standards set forth by the Beacon Award for Excellence. These dedicated healthcare professionals join other members of our exceptional community of nurses, who set the standard for optimal patient care.

“Being recognized as a Beacon unit, especially while working to meet the challenges of the COVID-19 pandemic, underscores the team’s ongoing commitment to providing safe, patient-centered and evidence-based care to patients and families,” Bettencourt explained. “Achieving this award is an honor, and the team should be proud of setting such a high standard in patient care and positive patient outcomes,” Bettencourt added. 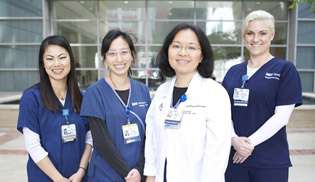 A team of about 16 nurses from the West Medical Intensive Care Unit (MICU) at Ronald Reagan UCLA Medical Center are the proud recipients of the 2017 National Patient Safety Foundation (NPSF) DAISY Award for Extraordinary Nurses.

The MICU nursing team was initially honored with a DAISY Award in 2015 for providing exceptional and compassionate care to Kalynn, a patient in her 20s diagnosed with cystic fibrosis. That award, which recognizes nurses who go above and beyond the traditional nursing role to meet the needs of patients with immune diseases and the needs of their families, qualified the West MICU nurses to vie for the combined NPSF DAISY Award this year.

UCLA Health’s West MICU team bested more than 90 other nursing teams from around the world to win this year’s NPSF DAISY Award.

“During the 10 months Kalynn spent in the MICU awaiting a double lung transplantation, the nurses grew to think of her and her loved ones as family,” says Sherry Xu, RN, MICU unit director. In turn, Kalynn and her family embraced her care providers, referring to them as Team Kalynn. In addition to giving Kalynn’s room a homier look and decorating it for each holiday, the nurses routinely braided her hair, threw her a birthday party, made scrapbooks with encouraging messages and photos, and took her outside as much as possible. Once, they even managed to spirit her away to a movie theater, no small task for a patient with cystic fibrosis. “Just taking Kalynn to our outside patio required a concerted effort to ensure there were enough oxygen tanks for the excursion,” says Lan Vuong, RN, a MICU nurse who cared for Kalynn.“It was equally important that she didn’t get too exhausted or experience pain.”

Kalynn entered the hospital in April 2014. This was about the same time that the 24-bed MICU, which is staffed by about 120 nurses, split into east and west teams. The division was part of an innovative team model led by Cathy Ward, PhD, chief nursing officer for Ronald Reagan UCLA Medical Center. For more information about the team award, visit the Daisy Foundation website.