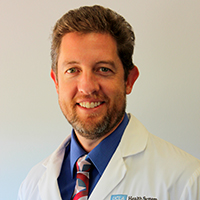 Dr. Steven Mittelman first became a Bruin in 1989, when he began his undergraduate work as a Biochemistry major. He was proud to be a member of the Solid Gold Sound of the UCLA Marching Band! After earning his BS in Biochemistry from UCLA, Dr. Mittelman went on to earn his PhD in Physiology and a MD at Keck School of Medicine, USC. He completed both his pediatric residency and pediatric endocrinology fellowship at the Children’s Hospital Los Angeles. At CHLA, Dr. Mittelman became the Founding Director of the Diabetes & Obesity Program, as well as the Donnell Society for Pediatric Scientists. He also served as Director of the USC/Caltech Combined MD/PhD Program.

Dr. Mittelman was pursuing research in the physiology of obesity, when he learned about the strong associations between obesity and cancer. Namely, obese people have an increased risk of dying from cancer. Dr. Mittelman learned that children who are obese when they are diagnosed with leukemia have a worse prognosis. Based on this clinical observation, Dr. Mittelman developed preclinical models to investigate how obesity influences leukemia outcome. This has resulted in several interesting discoveries which he continues to pursue. Dr. Mittelman is also involved in a number of other obesity-related research projects, primarily working on understanding the causes and treatments of childhood obesity and how adiposity alters physiology and leads to long-term consequences. His research program is funded by the NIH and private foundations, and has resulted in over 50 publications. Dr. Mittelman also has extensive clinical experience and enjoys working with patients to improve their quality of life.