What is a hemispherectomy?

A hemispherectomy is a radical surgical procedure where the diseased half of the brain is completely removed, partially removed and fully disconnected or just disconnected from the normal hemisphere. This is one of the most successful operations at stopping seizures in carefully selected patients.

Watch Video: Hemispherectomy: When half the brain is better than the whole

Which patients are appropriate for a hemispherectomy?
Generally speaking, very young patients, who have severe epilepsy or spasms not responding to medications and affecting only one half of the brain, are good candidates for this procedure.  The most common underlying diagnosis that can lead to this procedure include hemispheric malformations of cortical development, hemimegalencephaly, peri-natal stroke, Sturge-Weber Syndrome and Rasmussen’s Encephalitis.  Typically, when patients are being considered for this procedure, they have already lost strength on one side of the body including loss of dexterity with the hand and loss of peripheral vision corresponding to the diseased half of the brain.  Therefore, any additional loss of function from this procedure is typically minimal if any.

How important is timing for hemispherectomy?
Timing for consideration of hemispherectomy is critical.  The sooner this procedure is performed in a child’s life, the greater the ability for the child to have a life as close to normal as possible.   This is due to the brain’s ability to re-wire itself, a process known as neuro-plasticity.  The best outcomes are achieved in children less than 2 years of age.  This procedure can certainly be performed in older children but the degree of neurological recovery will be less when compared to younger children.  In our experience, language function can be regained if the hemispherectomy performed involves the dominant hemisphere of the brain before the age of 6 years.  Young children who have failed medical therapy should be referred for an epilepsy surgery evaluation in an expedited manner. 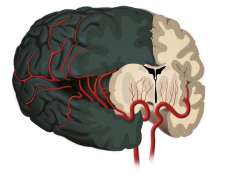 An anatomic hemispherectomy involves physically removing the diseased hemisphere of the brain including the frontal, parietal, temporal and occipital lobes.  The deeper structures in the brain including the thalamus and basal ganglia are left in place, as they are not generally thought to generate seizures.  This operation generally results in more blood loss, greater blood transfusion requirements, a longer operation and an increased probability of developing postoperative hydrocephalus.  It is generally reserved for situations where there are residual seizures despite a previous attempt at a functional hemispherectomy. 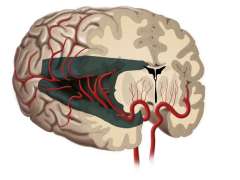 How long is the hospital stay after a hemispherectomy?
The hospital stay following a hemispherectomy can be variable.  Typically, the child will spend the first 3 to 4 days in the pediatric intensive care unit under close observation while there is a surgical drain in place.  Following this, the child will be transferred to a regular room where they will be evaluated by a physical therapist, occupational therapist and speech therapist.  The total hospital stay is generally one week in duration after which time, the child is usually sent to an inpatient rehabilitation facility to regain further strength and function prior to going home.  If inpatient rehabilitation is not required, home or outpatient therapy can be coordinated at this time.

What complications are possible following hemispherectomy?
When performed at experienced centers, children often have excellent long-term seizure outcomes.  In fact, a hemispherectomy is one of the most successful epilepsy operations performed.  Occasionally, some complications may occur including the need for a blood transfusion, aseptic meningitis, postoperative fevers and infection.  Hydrocephalus (excess brain and spinal fluid in the brain) is condition that can occur either immediately after surgery or years later.  This is very effectively treated through placement of a shunt.

What can you do with half a brain?

Dr. Gary Mathern at TEDxConejo
Dr. Mathern's research interests involve laboratory studies trying to understand the basic mechanisms of seizure generation in the patients he operates on as a way to develop new and better treatments. Among these research interests are studies to understand neuroplasticity after cerebral hemispherectomy the topic of his talk.
View TEDx video