Radiologists are experts in all types of imaging, including advanced techniques.

Carotid Stenosis also known as carotid artery atherosclerosis is a result of Hypercholesterolemia (high cholesterol), Diabetes Mellitus, and/or Chronic hypertension. These carotid arteries provides the main blood supply to the brain which may become narrow as a result of cholesterol plaque build up and is the cause for 20% of strokes. Atherosclerosis affects the arteries of brain, heart, kidney and other vital organs.

Atherosclerosis is an asymptomatic disease. It typically begins early childhood and is undetectable by most routine diagnostic exams. In 2004 US data, it has been found that 65% of men and 45% of women display the first symptoms of atherosclerosic disease: heart attack or sudden cardiac death within an hour of the symptom onset. The risk factors increases with age; for men after the age of 45 and in women after age 55. Family history is also a contributing element, along with smoking, high blood pressure, diabetes, obesity and physical inactivity.

However, there are patients whose risk factors make surgery difficult. Such is the case with Ralph Waycott who was older and had lung problems which increase the risk for heart attack during general anesthesia. In addition, Ralph had radiation therapy in the neck which makes it difficult to operate due to the severe scarring. Ralph was symptomatic, having had 2 episodes of weakness of the right neck and showed narrowing of the left carotid artery. 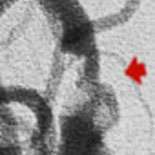 Fig 1: An anterior-posterior view of the left carotid artery in the neck shows the narrowing of the artery. 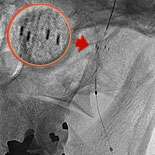 Fig 2: A carotid filter balloon, an umbrella like device, is shown after insertion into the left carotid artery in Ralph's neck. 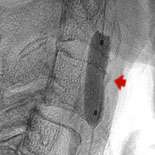 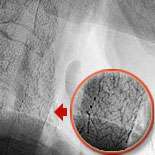 Fig 4: A stent, which is a metallic cage, is placed in the artery to keep it opened.

The cutting edge treatment is to insert a carotid filter balloon which is an umbrella like device used to catch debris as the artery is being opened. Fig.1 shows Ralph's narrowing of the left carotid artery. Fig.2 shows the device being inserted in Ralph's artery. In fig.3 the carotid balloon's up showing inflation of the balloon which opens the blocked artery. A stent (fig.4) which is a metallic cage is placed in the artery to keep it opened.

This minimally invasive approach avoids the need for general anesthesia and allows for brain monitoring during the procedure.