Our sleep medicine physicians are recognized experts in sleep disorders treatment. To find the right doctor for you, connect with a customer care specialist at 310-794-1195.

A look at the body's natural time-keeping system

Most of the processes that occur in the mind and body follow natural rhythms. Those with a cycle length of about one day are called circadian rhythms.

What Are Circadian Rhythms? 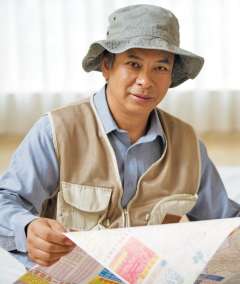 Circadian rhythms have an effect on all of the following:

Circadian rhythms are regulated by small nuclei in the middle of the brain. They are called the suprachiasmatic nuclei (SCN). Nuclei act as control centers. The SCN are connected to other parts of the brain. Together they control your circadian rhythms, along with other body functions. For most people, the length of a complete cycle is very close to 24 hours.

A pathway runs from your eyes to the SCN. Light seems to play the largest role in setting your circadian "clock." Sunlight and other time cues are used to keep your clock set from day to day. This can cause blind people to have problems with their sleep. It is hard for them to get the time cues needed to set their circadian clocks. Other factors may affect the SCN and the setting of the circadian clock. These include the following:

The circadian rhythms of a healthy person are "in tune" like the many instruments of an orchestra. Body temperature, for example, starts to rise during the last hours of sleep. This occurs just before waking up. This may promote a feeling of alertness in the morning. Body temperature decreases at night when the time for sleep draws near. A small drop in temperature also occurs in most people between 2 p.m. and 4 p.m. This may explain why many people feel sleepy in the early afternoon. It has not been proven that changes in body temperature determine our sleep habits. But there does appear to be a link between the two.

Your circadian system seems to be programmed to a large extent by genetics. Sleep studies show that sleep tends to consist of normal cycles of sleep stages. It also occurs most often in a single block of time at night. Many factors can cause your "circadian orchestra" to be out of tune. The circadian system appears to change as you age. These changes can affect your body's natural rhythm. They also affect your ability to respond to time cues. These changes may cause your body to have a hard time keeping up with the demands of your daily schedule.

A conflict can also arise when time demands keep you from following your body's sleep signals. This can greatly disrupt your normal sleep pattern. These demands can be related to any of the following:

We are just starting to understand how the circadian system works. As we learn more, we are able to better treat related sleep problems. The following are the most common of these problems.

The most common circadian sleep problem is jet lag. This occurs when a person travels across many time zones. A good example of this is a typical flight from the United States to Europe. Such a flight often produces jet lag symptoms. The jet lag can last for a week or longer.

Symptoms related to jet lag include the following:

Some people need up to a week to adjust to new time cues. Others are able to adapt more quickly. It also depends on the number of time zones involved. Most people have a mild form of "jet lag" twice a year. This occurs during the switch to and from daylight-saving time.

Shift work disorder affects people who work night shifts or rotating shifts. Their problem is much like jet lag, even though they never change time zones.

People on the night shift have to work while others are sleeping. Then they must try to sleep while others are awake. They tend to get less sleep during the day than most others get at night. Their sleep is often fragmented during the day. Their brains are active and are programmed to be awake. People who work rotating shifts often find it hard to get enough sleep. Their changing work schedules keep them from setting a sleep pattern.

People with delayed sleep phase disorder are not able to fall asleep at a normal time at night. They may stay awake until 2 a.m. or later. This makes it hard for them to wake up in time for work or school. Few lifestyles allow for this kind of sleep-wake schedule. This problem is more common in young adults than in other age groups. It can interfere with a job or school. It can also cause mental stress.

Advanced sleep phase disorder is more common in older adults. It has only recently been recognized as a major problem. People with ASP tend to get very sleepy in the early afternoon. As a result, they go to bed much earlier than normal. This causes them to wake up too early in the morning. Then they are unable to go back to sleep.

ASP usually does not interfere with normal working hours. Society is more tolerant of this problem than of DSP. ASP does become a problem when sleepiness interferes with evening plans. It can be hard to keep business or social commitments at night. A lack of sleep does little to fix this problem. People with ASP will still wake up early even if they force themselves to stay awake until later at night.

People with an irregular sleep-wake rhythm are unable to set a sleep pattern no matter how hard they try. Their bedtimes may occur at various times in a 24-hour period. These times may also drift later and later. The problems that result are much like those related to jet lag.

What Treatments Can Help People With Circadian Rhythm Disorders?

Certain changes to the sleep schedule can alter circadian rhythms. This can help travelers and shift workers. For example, those working rotating shifts should try the following:

You should always discuss any sleep problems you may have with a doctor. He or she can help find the source of your problem. Then the doctor will know the best way to treat it.