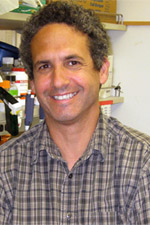 Michael Teitell received B.S. and M.S. degrees from the UCLA College Honors Program as a Departmental Scholar in Chemistry and Biochemistry in 1985. He earned combined M.D. and Ph.D. degrees in the UCLA Medical Scientist Training Program in 1993. His graduate and early post-doctoral studies were with Dr. Mitchell Kronenberg at UCLA in Molecular and Cellular Immunology. Dr. Teitell was a Resident and Clinical Instructor in Anatomic Pathology at Brigham and Women's Hospital and Harvard Medical School from 1993-1995. During this time he was a Research Associate with Dr. Richard Blumberg. From 1995-1997, Dr. Teitell was a Resident in Clinical Pathology at UCSF and a post-doctoral researcher with Dr. Joe Gray. From 1997-1999, he held a joint appointment at Children's Hospital of Los Angeles as a Pediatric Pathology Fellow and at UCLA as a Clinical Instructor in Pathology. He became an Assistant Professor in the UCLA Department of Pathology and Laboratory Medicine in 1999. He was jointly appointed in the UCLA Department of Pediatrics in 2001 and was promoted to Associate Professor with tenure in 2004. He currently serves as Chief of the Division of Pediatric and Developmental Pathology, with board certification in anatomic, clinical and pediatric pathology.

Dr. Teitell has received several important honors and awards. Among these are the David Paul Kane Scholar Award of the Jonsson Cancer Center Foundation (2000-2001), the Lymphoma Research Foundation Junior Faculty Award (2001-2002), the FOCIS/Millenium Pharmaceuticals Young Investigator Award in Genomics Research (2001-2002), a Scholar Award from the Leukemia and Lymphoma Society (2003-2008), election to the American Society of Clinical Investigators (2004) and a Margaret E. Early Medical Research Trust Award (2005).

Michael A. Teitell, MD, PhD click here to update your profile
Back to search