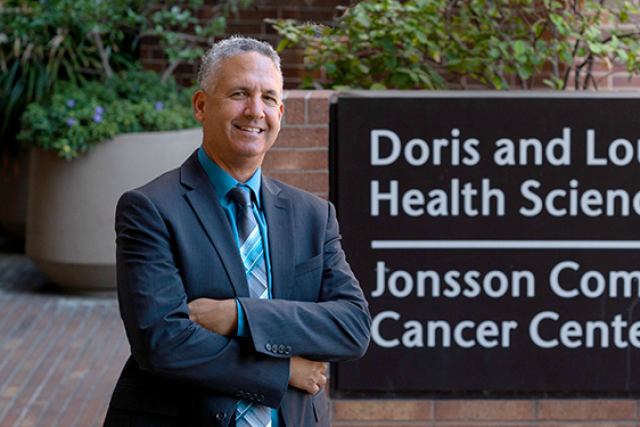 Dr. Michael Teitell, a renowned molecular immunologist and biochemist, has been named director of the UCLA Jonsson Comprehensive Cancer Center and president of the Jonsson Cancer Center Foundation.

Teitell, who was chosen after a national search, has been a member of the faculty at the David Geffen School of Medicine at UCLA since 1999. He is the Latta Endowed Professor of Pathology and holds joint appointments in the departments of pediatrics and bioengineering. He serves currently as chief of the division of pediatric and neonatal pathology, with board certification in anatomic, clinical and pediatric pathology.

His appointment, effective Aug. 8, was announced by Executive Vice Chancellor and Provost Scott Waugh. Teitell will succeed Dr. Kenneth Dorshkind, who has served as interim director since 2014.

“Today’s cancer care environment is undergoing dramatic change, and Dr. Teitell is a superb researcher and administrator who is extraordinarily well-qualified to lead the Jonsson Cancer Center,” said Dr. John Mazziotta, vice chancellor for UCLA Health Sciences and CEO of UCLA Health. “Michael has the vision and expertise to position our medical enterprise as a model nationally for excellence in cancer research, education and truly integrated patient care.”

Dr. Kelsey Martin, dean of the medical school, said he will be “an essential partner in the academic and clinical activities of the school, with an exceptional understanding of the entire spectrum of our research activities from the purely investigational, which provide the early seeds of discovery, to the translational.”

The Jonsson Comprehensive Cancer Center has more than 450 researchers and clinicians engaged in cancer research, prevention, detection, control, treatment and education. As part of one of the nation’s largest comprehensive cancer centers, its physicians and scientists handle more than 20,000 patient visits per year and conduct hundreds of clinical trials, providing the latest in experimental cancer treatments. Its robust research program has established an international reputation for providing the best in experimental cancer treatments and expertly guiding the next generation of medical researchers.

Under Teitell’s leadership, the Jonsson Cancer Center will build on its current strengths to integrate basic, translational and clinical research with clinical care to provide the finest patient-centric care for people with cancer. This integration aligns with ongoing strategic planning efforts at UCLA, which aim to provide outstanding patient care by leveraging the synergy of our clinical care, community engagement, education and research missions.

“I am truly thrilled and honored to join this amazing community of researchers, physicians, faculty and young scientists-in-training, and who are united in their passion and commitment to defeating cancer,” Teitell said. “The Jonsson Cancer Center exemplifies the absolute highest standard of excellence in cancer research, education and patient care. It is a privilege to serve UCLA’s mission of providing the best in experimental and traditional treatments for patients and their families, caregivers and survivors.”

Teitell received concurrent bachelor’s and master’s degrees from the UCLA College Honors Program, and went on to earn combined medical and doctoral degrees at UCLA, where he studied chemistry and biochemistry. He completed his postdoctoral training in anatomic pathology at Brigham and Women’s Hospital and Harvard Medical School, and at UC San Francisco as a resident in clinical pathology.

At UCLA, research in Teitell’s laboratory began with studies of fundamental mechanisms of cancer formation and progression, particularly for B lymphocyte malignancies. This led to projects in stem cell and cancer cell metabolism and the collaborative development of new approaches in cell engineering and response detection.  The research lab has received continuous funding since 1999.

Teitell has been elected to the Association of American Physicians and the American Society of Clinical Investigators. Among other recognitions, he received the Stohlman Memorial Scholar Award from the Leukemia Society of America, the Margaret E. Early Medical Research Trust Award and the FOCIS/Millennium Pharmaceuticals Award for Genomics Research.