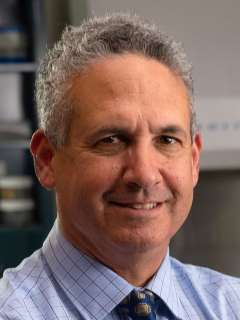 Michael Teitell received B.S. and M.S. degrees from the UCLA College Honors Program as a Departmental Scholar in Chemistry and Biochemistry in 1985. He earned combined M.D. and Ph.D. degrees in the UCLA Medical Scientist Training Program in 1993. His graduate and early post-doctoral studies were with Dr. Mitchell Kronenberg at UCLA in Molecular and Cellular Immunology. Dr. Teitell was a Resident and Clinical Instructor in Anatomic Pathology at Brigham and Women's Hospital and Harvard Medical School from 1993-1995. During this time he was a Research Associate with Dr. Richard Blumberg. From 1995-1997, Dr. Teitell was a Resident in Clinical Pathology at UCSF and a post-doctoral researcher with Dr. Joe Gray. From 1997-1999, he held a joint appointment at Children's Hospital of Los Angeles as a Pediatric Pathology Fellow and at UCLA as a Clinical Instructor in Pathology. He became an Assistant Professor in the UCLA Department of Pathology and Laboratory Medicine in 1999. He was jointly appointed in the UCLA Department of Pediatrics in 2001 and was promoted to Associate Professor with tenure in 2004. He currently serves as Chief of the Division of Pediatric and Developmental Pathology, with board certification in anatomic, clinical and pediatric pathology.

Dr. Teitell has received several important honors and awards. Among these are the David Paul Kane Scholar Award of the Jonsson Cancer Center Foundation (2000-2001), the Lymphoma Research Foundation Junior Faculty Award (2001-2002), the FOCIS/Millenium Pharmaceuticals Young Investigator Award in Genomics Research (2001-2002), a Scholar Award from the Leukemia and Lymphoma Society (2003-2008), election to the American Society of Clinical Investigators (2004) and a Margaret E. Early Medical Research Trust Award (2005).

Dr. Michael Teitell's lab is interested in molecular mechanisms of malignant transformation, with an emphasis on germinal center derived B-cell lymphomas. A screen that compared gene expression profiles from B-cell lymphomas in immune deficient versus immune competent settings identified TCL1 as a dysregulated oncogene in a large number of B-cell leukemias and lymphomas. Generation of a TCL1 transgenic mouse, in which TCL1 expression was maintained throughout B- and T-cell development, lead to one of the first genetic models for germinal center B-cell lymphomas and less frequently B- and T-cell chronic lymphocytic leukemias.

Studies in this model and in comparable human tumor samples lead to the elucidation of key aspects of TCL1-driven lymphomagenesis, including companion genetic and epigenetic alterations required for malignant transformation, affected signal transduction pathways, and a mechanism for abnormal avoidance of cell death. Tcl1 was shown in a broad screen by others to be the only verified oncogene that regulates stem cell self-renewal, providing a potential molecular link between so-called cancer stem cells and B-cell lymphoma that our lab is pursuing in studies of stem cells.

Since TCL1 dysregulation is the key for its tumorigenic action, studies on the mechanism of its expression have lead to discovery of a novel gene regulatory program for germinal center B-cells that requires signaling to the transcriptional co-repressor TORC2/CRTC2. This signaling links DNA damage repair sensing, such as occurs during antibody maturation steps in germinal center B-cells, to a major metabolism pathway that controls glucose homeostasis and cell respiration. One current goal is to understand the complex interrelationship between DNA damage, gene regulation, and control of cell metabolism uncovered by this work and to identify key components in this network as targets for therapeutic intervention.