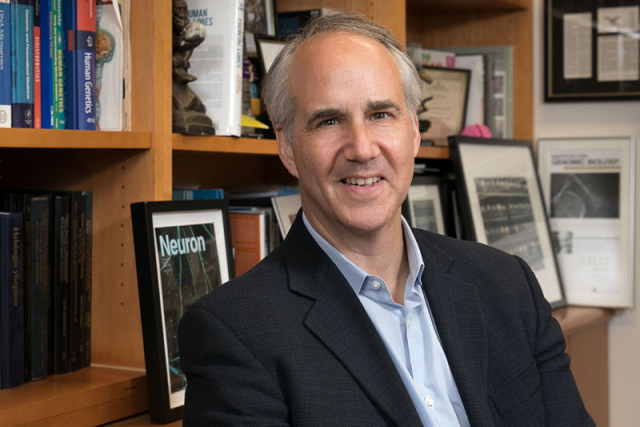 March 31, 2022—Dr. Daniel Geschwind, a pioneer in the application of systems biology methods in neurologic and psychiatric disease, has been awarded the American Academy of Neurology’s 2022 Cotzias Lecture and Award, the group’s highest honor.

“I am grateful for my students and trainees whose dedication and creativity have driven our work forward and my collaborators and the environment at UCLA that have supported us in our mission,” said Dr. Geschwind, the Gordon and Virginia MacDonald Distinguished Professor of Human Genetics, Neurology and Psychiatry at UCLA. He directs the UCLA Institute for Precision Health, pioneering the integration of genetics and genomics with clinical medicine to advance the diagnosis and treatment of disease.

Dr. Geschwind’s lecture, "Harnessing the Brain’s Molecular Architecture to Develop New Therapeutics for Neurologic and Psychiatric Disorders," will be presented at the meeting’s Presidential Plenary Session on Sunday, April 3, in Seattle.

Dr. Geschwind laboratory group has pioneered the application of systems biology methods in neurologic and psychiatric disease, with a focus on autism spectrum disorders (ASD) and neurodegenerative conditions. Dr. Geschwind is a pioneer in the transcriptomic and functional genomic analyses of the nervous system. His laboratory showed that gene co-expression has a reproducible network structure that can be used to understand neurobiological mechanisms in health and disease. He led the first studies to define the molecular pathology of autism and several other major psychiatric disorders and has made major contributions to defining the genetic basis of autism. He demonstrated the utility of using gene network approaches to discover new pathways involved in neurodegeneration and new approaches to facilitate neural regeneration.  More recently, his laboratory demonstrated how knowledge of 3-dimensional chromatin structure can be used to understand the functional impact of human genetic variation.

The highest award bestowed by the American Academy of Neurology, the Cotzias Lecture and Award is named for George C. Cotzias, MD, (1918-1977), who together with colleagues, developed L-Dopa treatment, the most commonly used intervention for Parkinson's disease. The academy has recognized seven Nobel laureates, as well as members of the National Academy of Sciences and National Institutes of Health institute directors, since the lecture and award were established in 1978.