Dr. Thomas Rando, director of the Eli and Edythe Broad Center of Regenerative Medicine and Stem Cell Research at UCLA, has received the NOMIS Foundation’s Distinguished Scientist and Scholar Award.

The five-year award will support Rando’s research into the molecular regulation of stem cell quiescence—a state in which a cell is not actively dividing but has retained the capacity to resume proliferating in response to certain stimuli. 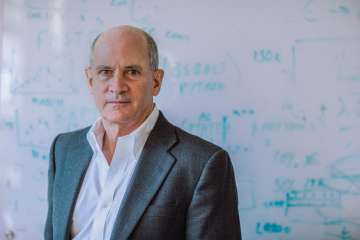 “For many years, quiescence was viewed as a relatively unimportant state during which cells are inactive,” Rando said. “We have only recently discovered that quiescent stem cells are like the proverbial still waters that run deep. Quiescence is a complex and highly regulated state that is critical to the long-term survival and availability of the stem cell populations our bodies rely on throughout our lives.”

The focus of Rando’s NOMIS-funded project is to explore the hidden secrets of the quiescent state—how it adapts to environmental shifts, how it changes as a result of aging and how cellular decisions are made to either maintain quiescence or break quiescence and divide. The ultimate aim of these studies is to inform the development of new methods to promote stem cell resilience and thus enhance tissue maintenance and repair across the lifespan.

“I am deeply grateful and honored for the NOMIS Foundation’s recognition and support,” said Rando, who is also a professor of neurology at the David Geffen School of Medicine and of molecular, cell and developmental biology. “In addition to the potential clinical impact, this award will enable my lab to shed light on the trade-off between survival and reproduction, an interplay that is at the very core of the evolution of species.”

Rando is a renowned neurologist and stem cell biologist whose research has yielded critical insights into stem cell function and tissue repair. His laboratory’s groundbreaking studies in mice found that old tissues could be rejuvenated by exposure to young blood. This work has formed the basis of an expanding area of aging research and led to clinical trials of novel therapies for Alzheimer’s disease and other neurodegenerative conditions.

NOMIS is a private Swiss foundation that aim is to catalyze scientific and human progress by supporting pioneering investigators, establishing collaborative research networks and creating optimal conditions for the advancement of high-risk basic research.

The NOMIS Distinguished Scientist and Scholar Award is presented each year to two scientists and scholars who have made significant contributions to their respective fields through groundbreaking, interdisciplinary research. The other 2022 honoree is Magdalena Zernicka-Goetz, the Bren Professor of Biology and Biological Engineering at the California Institute of Technology and a professor of stem cell biology and development at the University of Cambridge. The awards will be presented at a ceremony in Zurich, Switzerland in October 2022