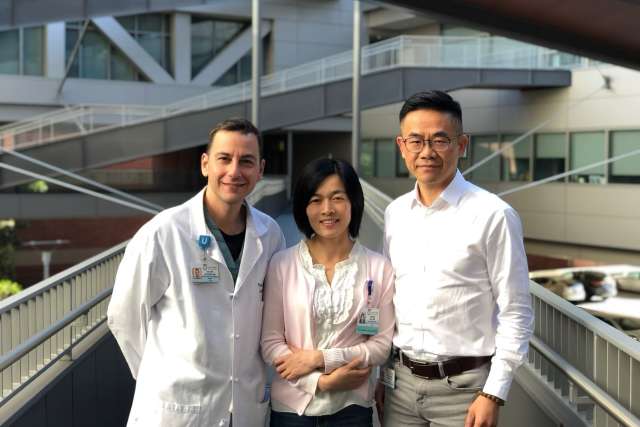 Primary liver cancer, the third-leading cause of cancer-related death worldwide, takes more than 30,000 lives in the United States each year. The high mortality rates can be attributed in part to the fact that a significant portion of the patients are detected at a late stage, when potentially curative treatments are no longer an option. Unfortunately, today’s screening methods are not able to routinely provide accurate, early detection.

New research led by UCLA Jonsson Comprehensive Cancer Center investigators and involving more than 50 researchers suggests that new technology in development may lead to a better way to detect early-stage hepatocellular carcinoma (HCC), which accounts for 80% to 85% of primary liver cancers and usually occurs in patients with liver cirrhosis or chronic hepatitis B virus.

The investigational technology measures and evaluates nanoparticles, called extracellular vesicles, or EVs, that are released by normal cells but even more so by tumor cells and cells within a tumor microenvironment.

“Tumor-associated extracellular vesicles are present in circulation at relatively early stages of disease and are readily accessible across all disease stages,” said Hsian-Rong Tseng, a UCLA Jonsson Comprehensive Cancer Center researcher and expert in molecular and medical pharmacology at the David Geffen School of Medicine at UCLA. “The cargo of EVs includes proteins, DNA, RNA, metabolites and lipids that are reflective of the tumor of origin, making EVs appealing for cancer biomarker development. Profiling of tumor-associated EVs is regarded as an emerging ‘liquid biopsy’ strategy for noninvasive cancer detection.”

Tseng and Dr. Vatche Agopian, a liver transplant surgeon and the director of the Dumont-UCLA Liver Cancer Center at the David Geffen School of Medicine, led the study with Dr. Yazhen Zhu, a research pathologist and assistant professor in pathology and laboratory medicine at the David Geffen School of Medicine, who co-directs the liquid biopsy laboratory at UCLA. They are co-senior authors of a paper published in the July 31 peer-reviewed journal Hepatology.

In the article, the UCLA researchers and collaborators introduced a streamlined surface protein assay (HCC EV SPA) capable of dissecting and quantifying eight subpopulations of HCC EVs. According to the authors, the HCC EV SPA technology may someday enable rapid, highly sensitive and affordable detection of early-stage HCC in at-risk patients with liver cirrhosis. It is composed of two powerful platform technologies:

The authors said early detection enables physicians and patients to start treatment early, which they expect would have a significant impact on survival rates.

“Prognosis of HCC is dismal, primarily due to the advanced stage at which the disease is often diagnosed,” Agopian said. “American Association for the Study of Liver Diseases (AASLD) guidelines recommend that at-risk patients undergo biannual liver ultrasound to detect HCC at a curative stage, but the accuracy of ultrasound imaging remains low, with sensitivity between 60% and 70%, with a specificity of 90%. Clearly, developing noninvasive tests for early detection is desperately needed.”

With momentum set by ongoing support from the National Institutes of Health (NIH), the authors said the long-term goal of this specific research project, which is currently under consideration for new NIH funding, is to further optimize and validate the HCC EV SPA in a larger scale of clinical study involving multiple institutions in the United States.