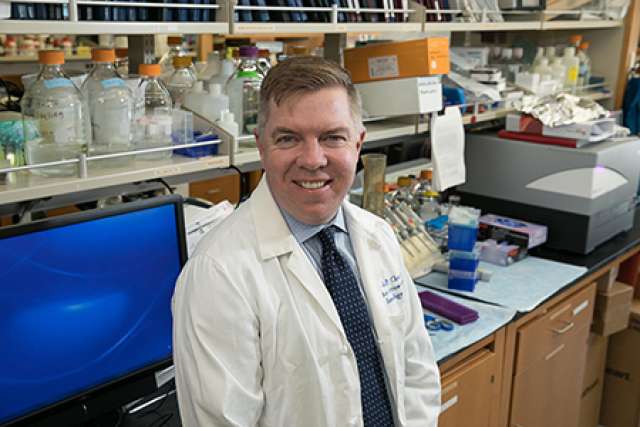 The introduction of the drug imatinib in 2001 revolutionized the treatment of a type of cancer called chronic myelogenous leukemia. In more than 80% of people with CML who received the drug, the disease went into complete remission.

However, in most people with chronic myelogenous leukemia, cancerous stem cells remain in the body for years after their cancer has gone into remission. If treatment with imatinib or another similar medication is stopped — and in some cases, even while treatment continues — the leukemia stem cells can cause cancer to recur.

Now, in experiments in mice as well as isolated human cancer cells, UCLA researchers have discovered a way to eliminate the CML stem cells. Their approach uses an antibody to block a protein that the stem cells rely on to grow. The advance, described in a study published in the Journal of Clinical Investigation, might eventually help treat not only chronic myelogenous leukemia but other cancers as well.

Imatinib, commonly marketed under the brand name Gleevec, is a tyrosine kinase inhibitor; it works by targeting the genetic abnormality that causes chronic myelogenous leukemia.

"Our results suggest that it may be possible to eradicate CML stem cells by combining this new targeted therapy with a tyrosine kinase inhibitor," said Dr. John Chute, the study's senior author and a member of the Eli and Edythe Broad Center of Regenerative Medicine and Stem Cell Research at UCLA. "This could lead to a day down the road when people with CML may not need to take a tyrosine kinase inhibitor for the rest of their lives."

Chronic myelogenous leukemia causes the bone marrow to produce too many white blood cells. More than 95% of all cases are caused by the same genetic change — a mashup of two genes that are normally located on different chromosomes.  Imatinib targets that “fusion gene."

Imatinib isn't a permanent cure in most cases, however.

"In the majority of people, the CML stem cells are still there," said Chute, who is also a professor of medicine and radiation oncology at the David Geffen School of Medicine at UCLA and a member of the UCLA Jonsson Comprehensive Cancer Center.

Several studies have shown that even after years on imatinib, when people stop treatment, their cancer has a significant likelihood of recurrence.

Over the past decade, Chute and his colleagues have shown that a molecule called pleiotrophin, which is produced by the bone marrow, supports normal blood stem cell growth and recovery from stress. They wondered whether pleiotrophin might also play a role in the survival of chronic myelogenous leukemia stem cells.

To find out, the team studied mice that had the CML-causing fusion gene. Normally, those mice quickly develop symptoms of chronic myelogenous leukemia and live for an average of just three to four months. But mice with the CML-causing gene that lacked the pleiotrophin gene had normal levels of white blood cells and survived for nearly twice as long.

The scientists then transplanted blood stem cells from the group of mice with the CML-causing gene into previously healthy mice, and the new mice contracted chronic myelogenous leukemia. When the researchers tried the same experiment using blood stem cells from the mice that lacked pleiotrophin, the transplant recipients showed little evidence of leukemia and their levels of the cancer-causing gene were less than 1% of the levels found in the control group of mice.

When Chute's team isolated CML stem cells from humans with the cancer, they discovered that the cells had 100 times the levels of pleiotrophin found in healthy blood stem cells. Further experiments revealed that the CML cells were producing their own pleiotrophin in addition to reacting to the pleiotrophin that's normally in the body.

"This provides an example of cancer stem cells that are perpetuating their own disease growth by hijacking a protein that normally supports the growth of the healthy blood stem cells," Chute said.

"Normal cells can proliferate and survive without pleiotrophin," Chute said. "But human CML stem cells are relatively addicted to pleiotrophin and don't survive well without it."

To evaluate its therapeutic potential, Chute's group tested the effect of combining imatinib and the anti-pleiotrophin antibody. Together, the drugs virtually eliminated human CML cells that had been transplanted into mice.

The anti-pleiotrophin antibody was used in preclinical studies only and has not been tested in humans or approved by the FDA as safe and effective for use in humans.

Chute said the researchers now are working on modifying the anti-pleiotrophin antibody to make it more similar to antibodies produced by humans, which would make them less likely to be rejected by the human immune system.