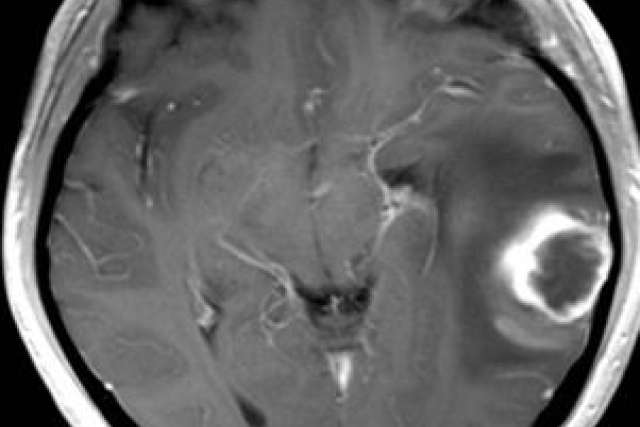 Published in this month's issue of the journal Radiology, the findings could help patients make better-informed decisions on whether to pursue or avoid therapy with the powerful drug.

The U.S. Food and Drug Administration in May approved the use of Avastin for the treatment of brain cancer. The drug shrinks tumors by choking off their blood supply. But because half of patients don't respond to Avastin, the therapy exposes them to unnecessary side effects and medication costs of up to $10,000 per month.

"Avastin is an expensive drug, yet only 50 percent of patients with recurring brain cancers respond to it," said lead author Dr. Whitney Pope, assistant professor of radiological sciences at the David Geffen School of Medicine at UCLA. "Until now, there has been no good way to identify these patients in advance. Our work is the first to suggest that we can predict which tumors will respond before the patient ever starts therapy."

Pope and his colleagues focused on glioblastoma, the most common and deadly form of adult brain tumor, which strikes 12,000 Americans a year. Despite therapy with surgery, radiation and chemotherapy, the average glioblastoma patient lives only 12 to 15 months after diagnosis.

The UCLA team studied 82 patients who had undergone surgery and radiation therapy to remove glioblastoma. Half of the patients received infusions of Avastin every two weeks. All underwent monthly brain scans by magnetic resonance imaging (MRI) to monitor change.

The researchers analyzed the MRI scans of the patients whose tumors returned. Explaining what the team saw requires an understanding of how the tumor creates an independent blood supply.

Cancer cells secrete a growth factor called VEGF that spurs the growth of new blood vessels to supply the tumor with oxygen and nutrients. Avastin blocks VEGF, essentially starving the tumor to death.

This process launches a chain of events that is detectable by MRI. Oxygen-starved cells produce more VEGF, which causes blood vessels to leak fluids into the tumor and surrounding tissue. This results in swelling, which boosts water's ability to move freely in the tumor and brain tissue. As cells disintegrate, they no longer pose a physical barrier to water movement.

"We theorized that tumors with more water motion would also have higher VEGF levels," explained Pope. "Because Avastin targets VEGF, it made sense that the drug would work better in tumors with high levels of the growth factor."

By measuring the amount of water motion within the tumor, the researchers were able to predict with 70 percent accuracy which patients' tumors would progress within six months and which would not. They detected greater water movement in the tumors of those persons who later responded best to Avastin.

"When we realized that high levels of VEGF are linked to greater cell death and increased water movement, we were able to predict the patients' response to Avastin before they began treatment," Pope said. "We were correct 70 percent of the time. Previously, identifying which patients would respond was like flipping a coin. This is a huge improvement."

The research finding presents clear clinical benefits to the patient, Pope said. "Knowing this information ahead of time will help doctors personalize therapy for each patient and decrease exposure to side effects," he noted.

Pope and his colleagues plan to confirm their findings in a larger study. The team will also test the new method's ability to identify responsive patients prior to surgical removal of their tumor.

Pope and Cloughesy are consultants for Genentech, which manufactures Avastin, and are collaborating with the company on several research studies.