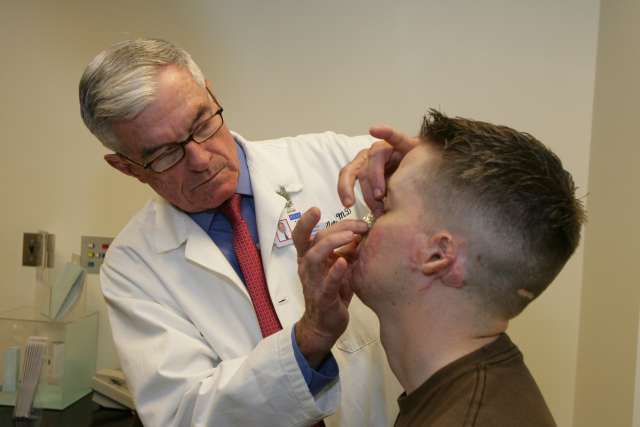 Dr. Timothy Miller was honored with the Congressional Medal of Honor Distinguished Citizen Award for his work reconstructing the faces of veterans severely disfigured during the wars in Iraq and Afghanistan. Miller is the former chief reconstructive surgeon for UCLA Health Operation Mend and emeritus professor of plastic and reconstructive surgery at the David Geffen School of Medicine at UCLA. He received the award during the Patriot Awards Gala in Knoxville, Tennessee, on September 10, 2022.

The award is presented to Americans who have distinguished themselves as dedicated to values of freedom, courage, selfless service and valor. The award was created by the Congressional Medal of Honor Society, which was chartered by Congress in 1958 to create a brotherhood among the living Medal of Honor recipients. Miller, who earned a Bronze Star for his service with the Army Special Forces in the Vietnam War from 1965 to 1966, served as Operation Mend’s chief surgeon from 2007 to 2012. Operation Mend was originally established as a pioneering partnership between UCLA Health and the United States military to address complex facial injuries.

Today, Operation Mend treats all complex physical injuries and also provides comprehensive psychological support and intensive treatment programs for symptoms related to post-traumatic stress disorder, traumatic brain injury, and substance use disorder associated with post-traumatic stress disorder for post-9/11 service members, veterans and their families. All treatment, travel and accommodations are provided at no cost. Miller was selected for the award based on the time and expertise he provided to Operation Mend and the warriors it served in its first five years. In those first five years alone, he and his colleagues performed over 200 procedures for Operation Mend patients.