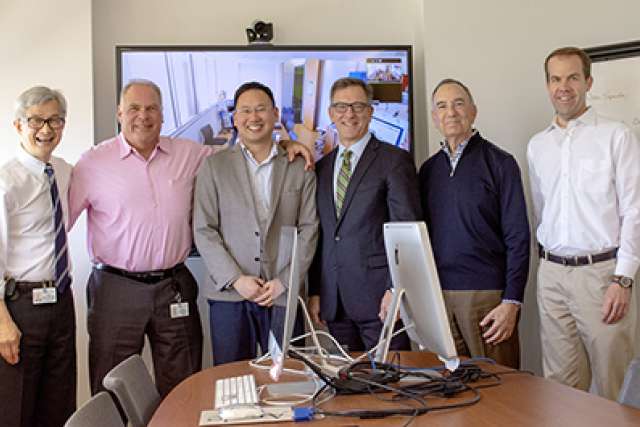 Dr. David Wong, associate dean for research, and his team received regulatory approval on their EFIRM (electric field-induced release and measurement) technology as a Clinical Laboratory Improvement Amendments (CLIA)-certified, College of American Pathology (CAP)-accredited assay to be used in clinical practice. EFIRM creates a reliable, novel, and impactful method to detect tumor-causing, lung cancer mutations in saliva and blood that is non-invasive, cost-effective, and quick. For the past four years until now, the technology has been in research and testing phases.

A major contributor to helping move the EFIRM testing phase along is the National Cancer Institute (NCI), who awarded Dr. Wong and his collaborators, Drs. Wayne Grody and Josh Deignan with the UCLA Department of Pathology and Laboratory Medicine and Drs. Fang Wei, Charles Strom and Michael Tu of the School of Dentistry, $2.5M in 2017. The grant's support successfully paid off, as the technology is now approved to be used in medical offices to assist a doctor's diagnosis of a major disease—lung cancer. The goal is to use results from EFIRM, based on a patient's saliva sample, to adjust therapeutic strategies in real-time, improving clinical outcomes.

Another grant from by the National Cancer Institute, awarded in October 2018 for $5M over five years, is continuing to develop and refine the technology for early assessment of cancer. Dr. Wong's lab is working with Dr. Denise Aberle, professor of radiology at the David Geffen School of Medicine at UCLA, Dr. Steven Dubinett, co-investigator and chief of pulmonary and critical care medicine in the Geffen School, and We Liao, co-inventor of the technology, to test the blood and saliva of at least 300 at-risk patients for lung cancer. Dr. Wong's team has shown that the technology can detect early-stage lung cancer with greater than 90 percent similarity with traditional tissue biopsies.

In another defining moment for liquid biopsy and salivary diagnostics, Dr. Wong, who also is a member of the UCLA Jonsson Comprehensive Cancer Center, was invited to speak on the EFIRM Liquid Biopsy technology in an NCI-sponsored session at the annual meeting for the American Association for Cancer Research (AACR) in Atlanta, Georgia on April 2. In front of hundreds of cancer researchers from around the world, Wong was included in a session on the topic; "Liquid Biopsy: The Holy Grail for Early Cancer Detection." Dr. Wong also chairs the Steering Committee of the NCI Liquid Biopsy consortium.

"Receiving regulatory approval for the EFIRM technology and also having the opportunity to present our research findings at a major cancer research meeting proves that salivary diagnostics must be integrated with mainstream, cutting-edge cancer early detection, screening and risk assessment," Dr. Wong said.