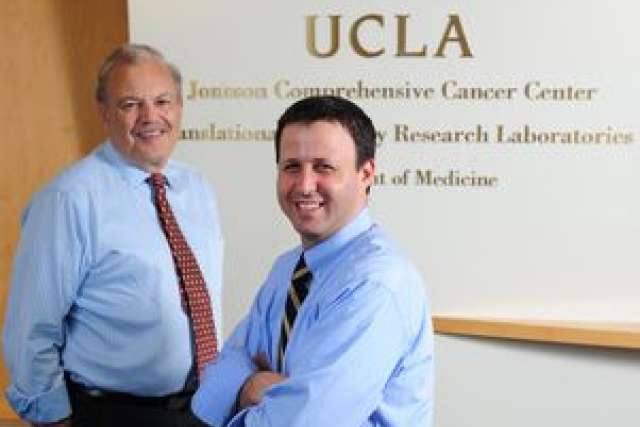 The U.S. Food and Drug Administration today approved a new drug to treat patients with advanced breast cancer, signaling a new strategy for arresting tumor growth and extending the time before cancer worsens in women with metastatic disease.

The drug, Ibrance (palbociclib), was studied in 165 post-menopausal women with advanced estrogen–receptor positive (ER+) and HER2–negative (HER2-) breast cancer who had received no prior systemic therapy for their metastatic disease. In 2013, after patients in a clinical study led by UCLA researchers showed a dramatic improvement, the FDA granted the drug "breakthrough therapy" status, allowing it to be fast-tracked for approval.

ER+/HER2- is the most common type of breast cancer; it is traditionally treated with therapies like tamoxifen or letrozole that target the hormone receptor pathway.

"Ibrance is the first drug in its class to be approved by the FDA," said Dr. Richard Finn, the study's principal investigator and a researcher at UCLA's Jonsson Comprehensive Cancer Center. "All of us at UCLA are very proud of the important role we played in bringing this new agent to patients."

"With the FDA approval, this study represents a potential practice-changing result," said Dr. Dennis Slamon, director of the Revlon/UCLA Women's Cancer Research Program and director of clinical and translational research at the Jonsson Cancer Center. "I believe palbociclib will now become a standard treatment approach for postmenopausal women with ER+/HER2- metastatic breast cancer."

The research originated in 2007, when Finn and Slamon met with Pfizer to discuss palbociclib and other experimental drugs in the company's pipeline.

In preclinical trials, the drug showed encouraging results against human breast cancer cells in culture dishes — and specifically against ER+ cancer cells. This led to a clinical study collaboration with Pfizer led by Finn and Slamon built on work at the Jonsson Cancer Center's Translational Oncology Research Laboratory.

A phase 2 study evaluated the drug in 165 post-menopausal women with advanced ER+/HER2- breast cancer who had not received prior systemic therapy for their metastatic disease. It showed progression-free survival was 20.2 months for patients who received palbociclib plus letrozole, compared with 10.2 months for those who received the letrozole alone. The results also indicated a 51 percent reduction in the risk of disease progression when palbociclib was used with letrozole.

"What is really remarkable is that we doubled the median progression-free survival," Finn said. "That type of result is not often seen in cancer medicine."

Over 80 percent of the women in the study with metastatic ER+ breast cancer received some benefit from the treatment. The drug's safety profile is distinct from traditional chemotherapy, but it does result in a lowered white blood cell count, which is manageable.

A phase 3 international clinical trial of the drug conducted by Finn and Slamon with Pfizer in approximately 660 people with advanced ER+/HER2- breast cancer has been completely enrolled.

Janet Klein was first diagnosed with stage 1 ER+ breast cancer in 2004, and she decided to undergo a double mastectomy. A few years later, doctors discovered that the breast cancer had returned as metastatic disease in her bones.

Dr. Sara Hurvitz, a UCLA oncologist and member of the Jonsson Cancer Center, told Klein about the clinical trial at UCLA. Klein enrolled and was prescribed Ibrance in combination with an anti-estrogen treatment. Nine months later, her scans showed no evidence of the cancer.

"I had a large party with a lot of champagne," she said. "It was life-changing but in a good way." said Klein.

Klein, now 59, said the FDA approval was cause for more celebration. "Sixty percent of all women diagnosed with this disease have my variety, and this drug having this sort of an impact, so fast and so effectively, is earth shattering."

Gloria Zollar, 78, joined the phase 2 clinical trial in 2010 after her UCLA oncologist discovered that her advanced breast cancer had spread to her bones. She has been on treatment since that then.

But after only a year of treatment, doctors noticed that Zollar's tumors had stopped progressing — allowing her to remain active and continue playing golf.

"I am now in remission, and every day I'm thankful to God that I'm alive and able to see my great-grandchildren and spend time with them," Zollar said.

She also is excited that the drug is now available to other women. "I am very pleased that other women could have a second chance at life like many of us who participated in the trial," Zollar said.