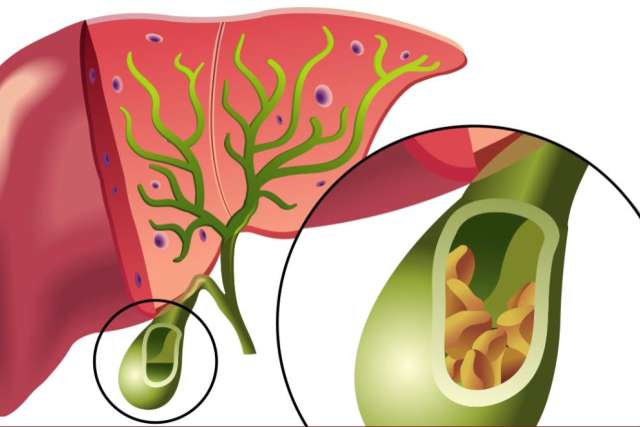 Dear Doctors: I had stabs of pain in the upper right side of my abdomen one day, so I did a telehealth session. The nurse said it might be gallstones and to see my doctor if it repeats. So far, it hasn’t happened again. What are gallstones? How do you get them, and what is the treatment?

Dear Reader: When talking about gallstones, we must also talk about the gallbladder. It’s a hollow, flexible organ that sits in the upper right of the abdomen, just below the liver and next to the pancreas.

The gallbladder stores a digestive fluid called bile, which the liver produces. Bile breaks down fatty foods into smaller components so they can be readily absorbed and used by the body. Bile also plays an important role in the elimination of certain waste products, including bilirubin, excess cholesterol and hemoglobin from aging red blood cells.

The gallbladder looks a bit like a deflated balloon when it is empty. Filled with bile, it becomes roughly the shape and size of a small pear. When someone eats foods that contain fat, which require bile for digestion, the gallbladder contracts. This forces the thick, sticky fluid into tiny tubules known as bile ducts. They direct the bile into the small intestine, where the absorption of nutrients takes place.

When someone has gallstones, it means that some of the bile in the gallbladder has formed into hard, pebblelike deposits. The most common cause is an overabundance of cholesterol, along with a corresponding deficit of bile salts. These are an important component of bile and aid in dismantling fats.

But when gallstones block the bile ducts, it can cause a gallbladder attack. Symptoms include sudden and ongoing pain in the upper right abdomen, as you experienced, or sometimes in the central area of the abdomen, just below the breastbone. Less often, the pain occurs between the shoulder blades or in the right shoulder. This pain may be accompanied by nausea or vomiting. The motion of the gallbladder can shift the gallstones, relieve the blockage and end the attack. But an ongoing blockage can result in inflammation and infection of the gallbladder, as well as of the liver and pancreas.

It’s important to seek medical care if you have a gallbladder attack. Risk factors for developing gallstones include being female, being overweight or obese, eating a fatty diet, not getting enough fiber and rapid weight loss.

When gallstones cause ongoing complications, diagnostic imaging tests may be required. Treatment options include surgery to remove the gallbladder or medications to dissolve existing gallstones. Unfortunately, these can take months to work, and they aren’t always effective. Medications are typically reserved for those who are poor surgical candidates. Meanwhile, because other conditions can cause the pain you described, it’s a good idea to check in with your doctor.