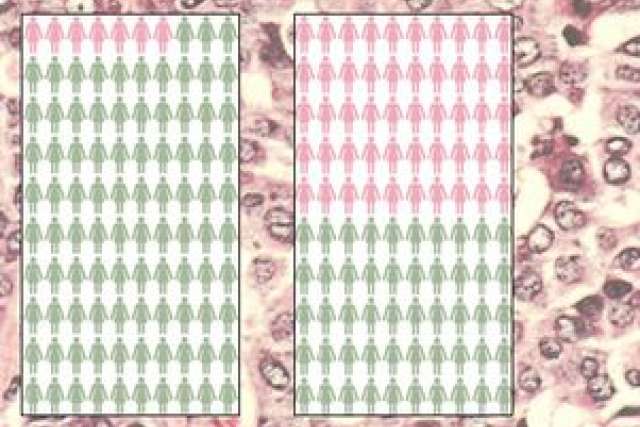 CDC (charts); National Cancer Institute (cells)<br>About 7 percent of U.S. women will get breast cancer by age 70 (left), but 50 percent of women with a BRCA1 or BRCA2 mutation will. The mutation also increases the risk for ovarian cancer.
September 3, 2015

Women who are carriers of mutated BRCA genes are known to have a significantly higher risk for developing breast and ovarian cancers than those who don’t. But a new study by UCLA faculty questions the value of screening for the genetic mutations in the general population — including those who do not have cancer or have no family history of the disease — because of the high cost.

The UCLA researchers found that compared with universal screening, other diagnostic tools remain more efficient and might be more cost-effective.

The paper was authored by Dr. Patricia Ganz, director of the division of cancer prevention and control research at UCLA’s Jonsson Comprehensive Cancer Center, and Elisa Long, assistant professor at the UCLA Anderson School of Management.

The researchers concluded the BRCA genetic test that is most widely used today — marketed by Myriad Genetics, it sells for about $4,000 — is too expensive to warrant universal screening, given how rare BRCA mutations are.

“The cost of BRCA testing would need to drop by 90 percent for testing to be cost-effective for the whole population,” Ganz said.

Long and Ganz calculated that for every 10,000 women screened, BRCA screening could avert  four cases of breast cancer and two cases of ovarian cancer more than family history-based testing would. But the BRCA screening would only extend patients’ life by an average of two days. For 99.75 percent of women screened, a negative genetic test offers no increase in life expectancy, nor would it eliminate the need for regular mammograms, and it could provide false reassurance that a woman is not at risk for breast cancer.

The study builds upon previous work by other researchers that analyzed genetic screening of women of Ashkenazi Jewish descent, a population in which one out of every 50 women carries a harmful mutation. Because a larger percentage of this group were identified as BRCA mutation carriers, Long and Ganz  found that the approach would yield an estimated 62 breast and 34 ovarian cancers averted per 10,000 women tested, and gains in life expectancy that were 16 times higher than with universal screening.

Of the 233,000 breast cancers diagnosed annually in the United States, only 5 to 10 percent are attributable to mutations in the BRCA genes. Women with breast cancer who carry these mutated genes usually develop the disease at a younger age, often in both breasts, and the cancer is often a more aggressive sub-type such as triple-negative breast cancer.

Long said that although the Myriad test remains the most commonly used test for BRCA mutations, a new $249 test recently announced by Color Genomics could encourage other companies to introduce lower-cost genetic tests — which could make universal screening more practical and more affordable. She noted, however, that questions would remain about the feasibility of providing personalized genetic counseling services on such a large scale.

“It’s like looking for a needle in a haystack,” Long said. “If only 1 in 400 women across the country have one or both of the BRCA-1 or BRCA-2 mutations, universal screening would cost $1 million to $2 million to detect a single BRCA mutation, or nearly $400 billion to screen all women in the U.S. Perhaps this money could be better spent on other diagnostic tools for young women, such as MRIs, to have the greatest impact.”

Long has a personal connection to the BRCA-1 mutation. She herself is a carrier, and last year, at just 33 years of age, she was diagnosed with triple-negative breast cancer, the most aggressive form of the disease. She had no family history of breast cancer.

Her treatment consisted of six rounds of chemotherapy, a bilateral mastectomy and reconstructive breast surgery. Fortunately, the chemotherapy killed the cancer before her first surgery, increasing her five-year survival probability from 60 to 95 percent. In July, Long also had her ovaries and fallopian tubes removed, which reduced her risk of ovarian cancer to less than 5 percent.

“On a personal level, I would have benefitted tremendously from universal BRCA testing, because I had no family history of breast cancer,” Long said. “But as a health services researcher I must also consider the relative value of different medical interventions. Many patients wish to know more about their genetic risk factors, and as more firms begin to offer genetic testing, we should expect the price to decrease, eventually making this an affordable policy.”

The study is published online today by JAMA Oncology.

Ganz is on the advisory board for InformedDNA, which provides genetic counseling services. The authors report no other conflicts of interest.