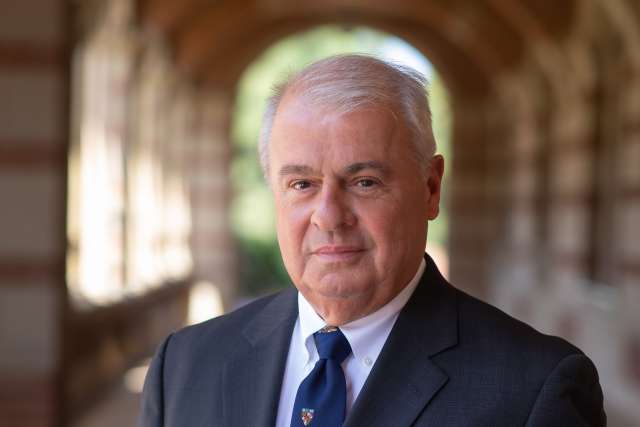 UCLA's Jonsson Comprehensive Cancer Center and at top institutions in Los Angeles received a $1.8 million grant from the W.M. Keck Foundation to fund collaborative research to genetically engineer the human immune system so it can fight melanoma.

"Something like this has never been done before," said Dr. James Economou, deputy director of the Jonsson Cancer Center and the study's principal investigator. "We are writing one of the most exciting stories in human biology, the genetic engineering of the human immune system. If we're successful, this can change the way we care for some cancer patients."

The process would work like a mini stem cell transplant. The blood stem cells that later differentiate into T lymphocytes would be removed from a patient's body and be genetically engineered so that they are drawn to a melanoma antigen called MART1 and become melanoma killing T lymphocytes. A "reporter" gene that can be traced with PET scanning also would be inserted into the cells, so researchers can monitor them non-invasively

The cells would then be returned to the bone marrow, where over the next two or three months they will develop into a genetically-engineered immune system designed to seek out and kill melanoma cells. Using PET, researchers will be able to watch as the immune system develops, goes to the tumor site and kills the cancer.

Melanoma patients have trouble fighting their cancer because only about 1/1000th of one percent of their T-cells recognize MART1. There aren't enough to fight the cancer. The study hopes to increase the percentage of cells that recognize MART1 to five to 10 percent.

"If we could do that, the patients would have plenty of killer T-cells to recognize and kill the cancer," Economou said.

The same strategy could be employed against any cancer if the appropriate antigen target can be discovered. The process also could be used as a model system to fight infectious diseases such as AIDS, Economou said.

"This research was sufficiently cutting edge that we needed a visionary foundation to support it," Economou said. "Keck was the foundation."

Clinical trials in humans are expected to be launched early next year. Other members of the team are equally optimistic about the study.

"I've been kicking around in science for 35 years and I don't think I've ever been this jazzed up about a project," said Dr. Owen Witte, director of the Eli and Edythe Broad Center of Regenerative Medicine and Stem Cell research at UCLA and the scientist heading up one portion of the project. "If this works, we'll be able to harness the power of the immune system to go after and attack a cancer in a sustained and prolonged manner that will be more effective than most chemotherapy regimes and even some of the targeted therapies."

Witte said there is "clear, indisputable evidence" that all common human cancers have tumor antigens that can be recognized by the immune system. But the most powerful defense in human biology against foreign pathogens, the immune system, is largely ineffective against cancer. This research, if successful, will make immune response against cancer as strong as it is against viruses and bacterial infections.

"I don't know that it's going to work, but I think the most important thing is that we're set up to understand why it doesn't work if the first few trials are not successful," he said. "Using molecular imaging, we should be able to see these cells and locate them in the body. And if one or more of those steps doesn't go right, we can go back, change something and try again. If this idea works, there's really no limitation to the types of cancers one can attack if one can develop the knowledge base about the specific type of antigens expressed in various cancers."

Based in Los Angeles, the W.M. Keck Foundation was established in 1954 by the late W.M. Keck, founder of the Superior Oil Company. The Foundation's grant making is focused primarily on pioneering efforts in the areas of medical research, science, and engineering. The Foundation also maintains a Southern California Grant Program that provides support in the areas of civic and community services with a special emphasis on children. For more information, visit www.wmkeck.org.