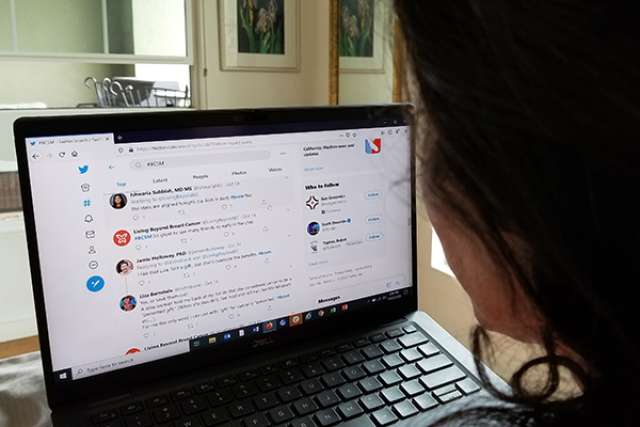 Posts using the #BCSM hashtag have generated 4 billion impressions over the past nine years, according to a UCLA-led study.

A UCLA-led review of nine years of social media posts with the hashtag #BCSM suggests that Twitter can be a useful resource not only for patients, but also for physicians and researchers.

The hashtag — an initialism for "breast cancer social media" — first appeared on Twitter in 2011. Created by two cancer survivors, it was used to curate a weekly informational chat for people with breast cancer. Dr. Deanna Attai became one of the group’s moderators a few weeks later.

"We physicians have a lot to learn from the online patient communities," said Attai, an assistant clinical professor of surgery at the David Geffen School of Medicine at UCLA, and the lead author of the study. "Tapping into this gold mine of experience will ensure that when we design research studies, we are asking questions that are actually relevant and important to patients."

The study, published today in the Journal of Patient-Centered Research and Reviews, is intended to help researchers understand the impact of the community that grew up around the Twitter chat. It reveals that, paralleling the rise of social media in everyday life, the growing popularity of #BCSM demonstrated that an increasing number of people with breast cancer are turning to online communities for support and education.

#BCSM has evolved into much more than a hook for weekly virtual meetings. The hashtag made it easy for people with breast cancer to find support and useful content — and for their family members, patient advocates, physicians, researchers, journalists and others to source good information.

"The #BCSM online community has experienced tremendous growth since its inception because it has helped fulfill a need among patients who were searching for information and support on the platform," said Attai, who is also a member of the UCLA Jonsson Comprehensive Cancer Center. "But it has also helped us physicians gain insight into the patient perspective and has given us a better understanding of their many issues. We often see patients in a much different setting. Compared to our exam room interactions, online is a more raw, unvarnished look into what patients are really going through."

The platform also gave professionals the opportunity to, in real time, correct misconceptions, provide guidance to people with breast cancer and steer them toward credible resources, Attai said.

To compile data on the use of #BCSM, the researchers used Symplur, a health care–focused analytics program commonly used to study trends on Twitter.

The research also found that number of health care professionals, including doctors, who use the hashtag has grown significantly, from 96 by the end of 2011 to more than 3,000 in 2019.

The study notes that the inclusive nature of the #BCSM hashtag — it's not restricted by gender or by people's stage of diagnosis — has probably contributed to its popularity. But its breadth might also limit how sustainable the online community will be, because as cancer therapy continues to become more personalized, people may increasingly seek out support groups that are more closely aligned with their own clinical situations.

The study's other authors are Dr. Matthew Katz of Lowell General Hospital in Massachusetts and Alicia Staley of Medidata, a New York-based life sciences technology company.