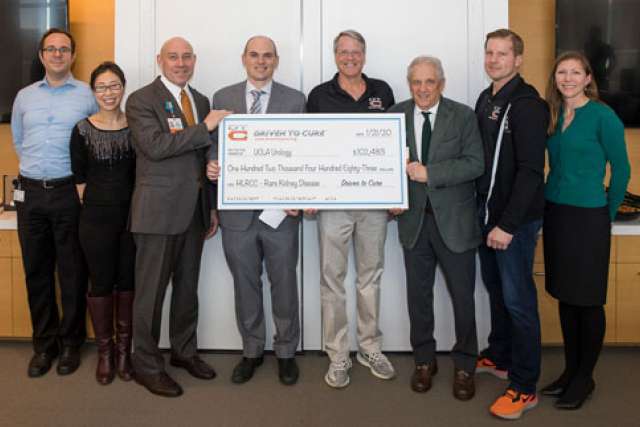 The gift will support physician-researcher Brian Shuch, MD, an associate professor of urology at the David Geffen School of Medicine at UCLA. The support will facilitate a collaboration between the cancer research labs at UCLA’s Jonsson Comprehensive Cancer Center in disciplines such as tumor metabolism, molecular biology, cancer genomics and population health.

Dr. Shuch’s research is focused on tumors with mutations in the fumarate hydratase (FH) gene. The FH gene makes an enzyme called fumarate hydratase, which is a fundamental component of how cells use use oxygen to metabolize sugar to generate energy. Mutated forms of the FH gene may cause cells to shift metabolism to generate energy without oxygen with the generation of lactate. This process is similar to how lactic acid builds up in muscle during exercise.

Driven to Cure was founded in 2015 by then 19-year-old Andrew Lee, who sought to combine his two biggest passions: cars and cancer awareness. Driven to Cure has raised more than $600,000 since its inception, and had become a recognized fountain of information for those who suffer from the rare disease.

Andrew Lee was diagnosed with late-stage kidney cancer after his first year of college. When diagnosed, with a rare form of the disease known as hereditary leiomyomatosis and renal cell cancer, or HLRCC, little was known about the condition and there were no treatments. People diagnosed with HLRCC are at an increased risk of developing a form of kidney cancer.

To help search for a cure, Andrew and his family decided to undergo seven different cancer treatment trials to extend Lee’s life. Dr. Shuch developed a strong relationship with Lee and his father, Bruce Lee, as they underwent the treatment regimens in various trials at academic centers.

Andrew Lee lost his battle with cancer on Easter Sunday, 2019.

The Lee family presented Dr. Shuch and the collaborative research program with a check, which also served as a formal declaration by Driven to Cure to the UCLA Kidney Cancer Program as a center of excellence for diagnosing, treating, and the research of rare, genetic kidney cancers such as HLRCC on the West Coast.

Dr. Shuch is also the director of the UCLA Institute of Urologic Oncology Kidney Cancer Program, the Henry Alvin and Carrie L. Meinhardt Chair for Kidney Cancer Research, and a member of the UCLA Jonsson Comprehensive Cancer Center.