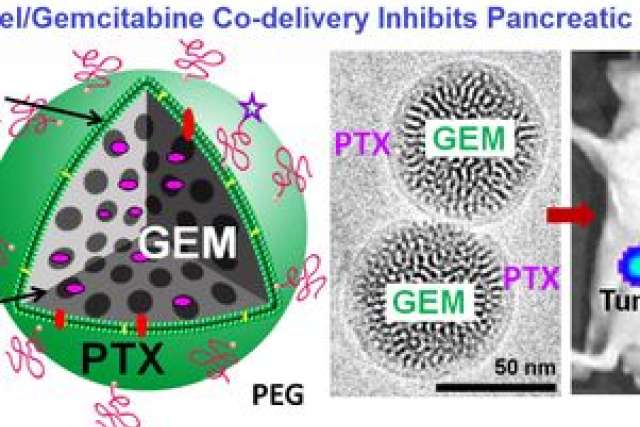 Scientists at UCLA’s California NanoSystems Institute and Jonsson Comprehensive Cancer Center have combined their nanotechnology expertise to create a new treatment that may solve some of the problems of using chemotherapy to treat pancreatic cancer.

The study, published online in the journal ACS Nano, describes successful experiments to combine two drugs within a specially designed mesoporous silica nanoparticle that looks like a glass bubble. The drugs work together to shrink human pancreas tumors in mice as successfully as the current standard treatment, but at one twelfth the dosage. This lower dosage could reduce both the cost of treatment and the side effects that people suffer from the current method.

Pancreatic cancer, a devastating disease with a five-year survival rate of 5 percent, is difficult to detect early and symptoms do not usually appear until the disease is advanced. As a result, many people are not diagnosed until their tumors are beyond the effective limits of surgery, leaving chemotherapy as the only viable treatment option. The chemotherapy drug most often used for pancreas cancer is gemcitabine, but its impact is often limited.

Recent research has found that combining gemcitabine with another drug called paclitaxel can improve the overall treatment effect. In the current method, Abraxane — a nano complex containing paclitaxel — and gemcitabine are given separately, which works to a degree, but because the drugs may stay in the body for different lengths of time, the combined beneficial effect is not fully synchronized.

“The beauty of the silica nanoparticle technology is that gemcitabine and paclitaxel are placed together in one special lipid-coated nanoparticle at the exact ratio that makes them synergistic with one another when co-delivered at the cancer site, giving us the best possible outcome by using a single drug carrier,” Meng said. “This enables us to reduce the dose and maintain the combinatorial effect.”

After the scientists constructed the silica nanoparticles, they suspended them in blood serum and injected them into mice that had human pancreas tumors growing under their skin. Other mice with tumors were given injections of saline solution (a placebo with no effect), gemcitabine (the treatment standard), and gemcitabine and Abraxane (an FDA-approved combination shown to improve pancreas cancer survival in humans).

In the mice that received the two drugs inside the nanoparticle, pancreas tumors shrank dramatically compared with those in the other mice.

Similar comparisons were made with mouse models, in which the human tumors were surgically implanted into the mice’s abdomens in order to more closely emulate the natural point of origin of pancreatic tumors and provide a better parallel to the tumors in humans. In these experiments, the tumors in the mice receiving silica nanoparticles shrank more than the comparative controls. Also, metastasis, or tumor spread, to nearby organs was eradicated in these mice.

“Instead of just a laboratory proof-of-principle study of any cancer, we specifically attacked pancreatic cancer with a custom-designed nanocarrier,” said Nel, who is also associate director for research of the California NanoSystems Institute. “In our platform, the drugs are truly synergistic because we have control over drug mixing, allowing us to incorporate optimal ratios in our particles, making the relevance of our models very high and our results very strong.”

Meng said the silica nanocarrier must still be refined for use in humans. The researchers hope to test the platform in human clinical trials within the next five years.

The research was supported by the U.S. Public Health Service and the National Science Foundation.