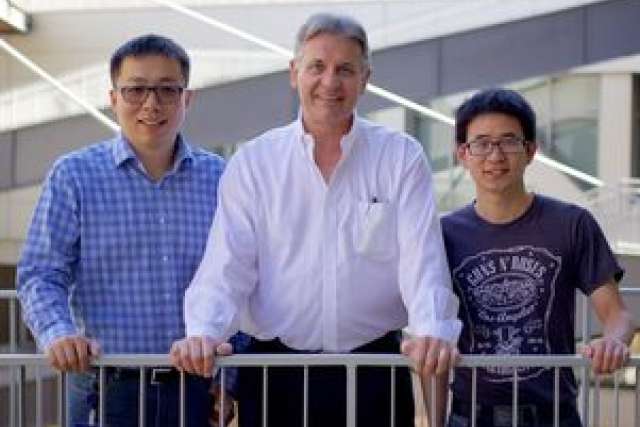 The overall five-year survival rate for people with pancreatic cancer is just 6 percent, and there is an urgent need for new treatment options. More than 80 percent of pancreatic cancer diagnoses occur too late for surgery, making chemotherapy the only possible treatment.

Scientists from the California NanoSystems Institute at UCLA and UCLA’s Jonsson Comprehensive Cancer Center have developed a delivery system for one chemotherapy drug that greatly reduces the occurrence of serious side effects while enhancing the drug’s effectiveness against pancreatic cancer. The approach uses mesoporous silica nanoparticles to deliver the drug directly to the tumor instead of having the free drug spread throughout the body via the bloodstream.

The study was led by Dr. Andre Nel, associate director of the California NanoSystems Institute, and Huan Meng, an assistant professor of nanomedicine; it was published in the journal ACS Nano. Xiangsheng Liu, a postdoctoral scholar in the UC Center for Environmental Implications of Nanotechnology, was the study’s first author.

In recent years, the chemotherapy regimen known as FOLFORINOX, which combines the drugs 5-fluorouracil, irinotecan, oxaliplatin and leucovorin, has improved survival outcomes over the standard treatment option, gemcitabine, which has fewer side effects. The severe side effects of FOLFORINOX, which are primarily caused by the irinotecan component, mean that only a minority of the healthiest patients can be treated with it.

The silica nanoparticles used in the study work like glass bubbles that contain a large amount of irinotecan in pores on their surfaces. The particles are wrapped in a double layer of lipids, similar to cell membranes, which safely trap the drug without leakage until the nanoparticle reaches the cancer site, where it is designed to unload the drug based on the acidic environment of the cancer cell.

“Because of stable drug retention by the lipid layers, the nanoparticles greatly reduce the amount of healthy tissue cells exposed to irinotecan,” Nel said. “The severe side effects of irinotecan largely result from its exposure to healthy tissues such as bone marrow, liver, and gut.”

The researchers compared the effectiveness of the lipid-coated nanoparticles to an FDA-approved irinotecan carrier that encases drug molecules in fatty spherical particles called liposomes. In mice with human pancreatic tumors, delivering the drug via silica nanoparticles reduced tumor size more effectively than delivering it via liposomes. The nanoparticle technique was also safer because less of the drug leaked into the bloodstream.

“This dramatically decreased the amount of severe side effects to the bone marrow, gastrointestinal tract and liver in the mice. The nanoparticles were also more efficient than the liposomes in treating the spread of tumors to surrounding organs,” Liu said.

The researchers believe that a FOLFORINOX regimen could be made safer and more effective against pancreatic cancer using the mesoporous silica nanoparticle delivery system for irinotecan, Meng said. He added that they still have some distance to go before launching a human clinical trial, but with this study they have developed a normal strategy for irinotecan delivery by a nanoparticle. Their technique would make it relatively easy to scale up the technology to production levels, because the nanoparticles’ effectiveness means that less of the drug is required for treatment.

The researchers also found that their approach can be used to deliver several other chemotherapy drugs, meaning that it may also prove useful in treating other types of cancer.

Support for this research was provided by the U.S. Public Health Service and the Hirschberg Foundation for Pancreatic Cancer Research. The research utilized the Core Technology Centers at the California NanoSystems Institute.